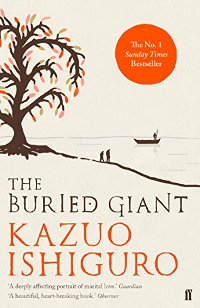 The Buried Giant
By Kazuo Ishiguro

I have wanted to read something by Ishiguro for a while and saw The Buried Giant for sale cheaply in a charity shop. This was about two weeks before the world learned that he had won the Nobel Prize for Literature.

Unfortunately, I found this book to be terribly dull and written in a very flat and boring way. Some sort of "fable", I started to wonder if it was aimed at children, or young adults. I kept on expecting something more to happen and be explained, perhaps a deeper significance to the novel. For this reason I pushed on and forced myself to finish it, but the ending was also a big disappointment. No doubt the Booker Prize winning Remains of the Day is better and I still plan on reading that. But avoid this one.