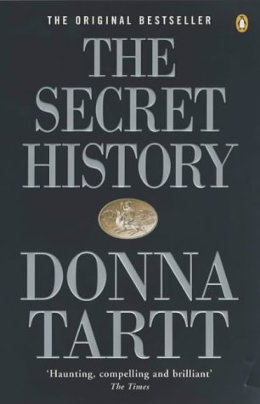 The Secret History
By Donna Tartt

Quite a cult book and one I've been tempted to read for years. Now I've read it, I know why it's so highly regarded. I really enjoyed it and it turned into one of those rare books you recognise as special as you read it, and one you don't want to finish.

Right from the start, you know the name of the victim and the perpetrators; the rest of the book is a slow but fascinating exposition of why this happened. As Tartt has said, this is a whydunnit not a "whodunnit". We know all the details of the crime and what led up to it half way through the book and are left with the consequences.

The novel follows a group of six students at a Vermont College through the eyes of Richard Papen, a newcomer and outsider. From California, he invents a more privileged back-story to cover his humble origins and to try and fit in with the others. They're East coast and richer. One or two are extremely well off, although there's a bit of an aura of dissolution around. Henry is the dark core of the group: tall, strong and a language savant, in love with the ancient world but cold and a bit odd. This group are "elite" in that they decide to drop almost everything except Classics, studying with one teacher only, the charismatic scholar Julian Morrow. They live and breathe in Greek and are submerged in a world very different to the modern. In fact, for much of the book, the world I felt submerged in was more F. Scott Fitzgerald's The Great Gatsby and the "gilded" 20's rather than the 1980's. The occasional reminders that the world we're in is actually the modern one was a jolt sometimes.

Great characters are the centre of the book and the story is driven forwards to an unexpected conclusion; you see things are starting to fall apart somewhat but never know where the pieces might end up.

I have also bought Tartt's The Goldfinch and look forward to reading it.