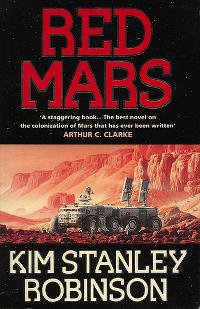 Red Mars, written by Kim Stanley Robinson in 1992, is a highly regarded novel about the human colonisation of Mars in the mid-21st Century.

It's a wonkish book in parts, analytical and scientific, and is good showing how the group of pioneering colonists (the first 100) deal with the challenges, social as well as technical. In this respect, it's a sociological study as well.

Robinson's research into the requirements of a Martian colony give the book a very believable edge. He also loves describing the planet's spectacular landscape, geography and geology, but perhaps at a slightly too great a length on occasion! Geologists may appreciate it a bit more.

The novel is much more than a science lesson though. Although some of the main characters are not very likeable, there is enough interesting discussion, and some excitement, to keep us reading. With planet Earth breaking up into war and conflict, increasing immigration to Mars and lots of tension between government and corporates, things start getting ugly.

So, hard science to a degree and sometimes the length of the discourse on the planet can drag, but I enjoyed the book quite a bit.

The political and sociological aspects of the story reminded me a little of Heinlein's The Moon is a Harsh Mistress, although Heinlein's novel is much more libertarian.