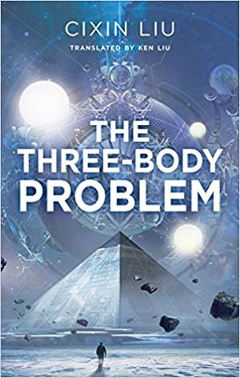 I really enjoyed this science-fiction trilogy by Chinese author Cixin Liu. It's full of amazing ideas in physics, maths, space, cosmology and philosophy. As a novel, it is sometimes a little clunky, especially the characters, who are often very thin, but the dazzling speculation keeps everything moving. The first book of the trilogy, The Three Body Problem, was good enough to convince me to pick up the next in the series, although I procrastinated. Unusually, I thought the second and third books were better. I let the Chinese names wash over me occasionally, knowing I would get used to them, and went along for the ride.

These books are definitely a bit "science nerdy" in (quite a few) parts, but if you like science and cosmology, that's a plus point. This is first contact with aliens and the consequences for Earth over the following decades and centuries: the aliens are invading, are on their way and have managed to sabotage Earth's scientific progress in order to make conquest straightforward. It turns out that the crux of the book is that the universe is not only full of life but that everyone is keeping their heads down. It is a very dangerous place (a "Dark Forest"). Not an entirely new concept but told well, and with a Chinese spin that's fresh. There are a lot of unexpected and wild twists, and slightly fresher perspectives.

It's entertainment but also educational as well, and might kindle an adult or adolescent interest in science and technology. If you like the idea of wondering what multi-decade human hibernation would be like, a fourth-dimensional space, the ultimate type of prisoner's dilemma on board a space warship or just how "magic" advanced technology might be, this is the book for you.

I am now looking forward to reading a book of his short stories: The Wandering Earth.

From a Wired article :

When Cixin Liu's The Three-Body Problem was published in English in 2015, it became the first Chinese sci-fi novel to win a Hugo award. President Obama took it on holiday. Mark Zuckerberg recommended it on Facebook. Yet even as his reputation spread, Liu, 53, continued to work in a power plant in Shanxi Province.