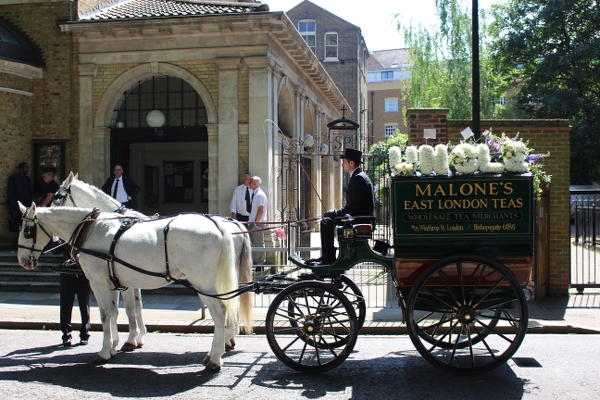 I've seen a few funerals at St Patrick's Church in Wapping since my work moved here in January. One funeral had a bit of an entourage, including a horse and carriage for the coffin, but nothing was like the recent funeral for Willie Malone.

The Malone funeral was on a very hot day, so I felt some sympathy for everyone in a suit and tie and there were a lot of people around dressed up. In the café, I was told a bit of background about the deceased, being well known and referred to as "Mr Tea". A real "East End" mix of people, and there were also a couple of (what I guessed were) press photographers. In fact, a report was in the East London Advertiser, with lots of pictures. Apparently, there was a bit of "colour" in his life.

I came by it because the church is across the road from The Turk's Head, a good café/bar I often go to for a coffee at lunchtime. I took my main camera that day, planning on a walk around the sights and taking some pictures.

From the Turk's Head web site :
the original building was once famous for being the local inn where the last quart of ale was served to condemned pirates on their way from Newgate to the Execution Dock