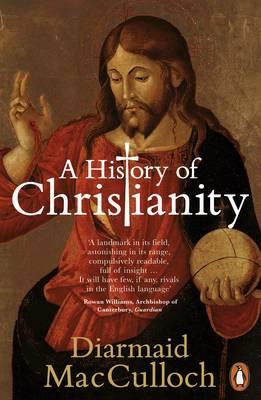 A History of Christianity
By Diarmaid MacCulloch

This is the reason there was a significant hiatus on any reading updates recently. An immense subject and a very big book is to blame!

At over a thousand pages, I picked up MacCulloch's book with some trepidation but having read his history of the Reformation a few years ago, and heard him talk many times on radio, I know how good he is, as a writer and speaker. MacCulloch's history of Christianity covers "three thousand" years because he considers the genesis of the story as starting long before the time of Herod "the Great": with the Jews, and then the Ancient Greek and Roman world. A useful starting point I think because Greek philosophy and Roman mores come to play very important roles in Christian thought and belief. Some might say, too much.

The thought and philosophy of Christians has sometimes been that of extremes, both good and bad. To many people throughout the world, it was literally a matter of eternal life or eternal damnation however, and this mattered a great deal: so much so, that people were willing to kill and be killed. In addition, theology can also hinge on some very subtle distinctions that are hard to grasp now. Be prepared for some theology then, but if you are prepared, this is fascinating and well written. MacCulloch has a dry wit and can sometimes brings a smile (or even laugh) throughout, keeping the narrative alive and interesting.

So far, always an excellent writer and historian.