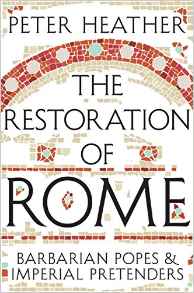 The Restoration of Rome
By Peter Heather

Heather's history book looks at three main characters who, wittingly or not, almost managed to restore a Western Roman Empire to existence after its dissolution in the mid-5th Century. Much of the huge amount of disruption of the 5th and 6th centuries was first caused by the eruption of the Huns into Europe, and subsequently the fighting over the spoils Attila and his tribe had accumulated. Enter the Goths.

Starting with Theoderic, King of the Ostrogoths. His high water mark covered all of Italy, Southern Gaul, Sicily and Spain, but it all disintegrated after he died in 526 AD with internecine fighting and the deaths (mostly unnatural) of successors.

Next we have Charles the Great, Charlemagne, King of the Franks and crowned Western Emperor in Rome in 800 AD, by the Bishop of Rome no less. His empire covered vast tracts of Europe (minus Spain, conquered by Islamic armies), including the Germanic heartlands over the Rhine and Northern Italy. But once again, family feud and a chronic inability to settle inheritance problems caused much to fragment a few generations after his death.

Heather then comes to the third "character", the Papacy. Initially content to play a small role in the Empire, and taking a subservient role to the Emperor even on matters of faith, the later Papacy truly found its voice. This was in large part due to the money and reformation initiated during and after Charlemagne, many changes in education and policy driven by northern Popes (the "barbarian popes" Heather mentions in the book title). Churchmen and educators were reacting aganist some serious Roman corruption in the 9th and 10th Centuries (the so-called Pornocracy).

Peter Heather doesn't shy away from using modern vernacular, or cultural references when explaining the way the world worked back then. His more laid back style might not always work but he pulls it off because he obviously knows his history and he manages to be both serious and sometimes funny. History should not be a dry discipline and this book isn't. It is a very good read because of that.