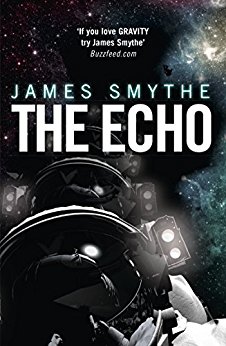 The Echo
By James Smythe

A team of people is sent into space to investigate an "anomaly": a region of complete darkness, perhaps growing, and perhaps heading our way slowly. Twenty years previously, another spaceship sent on a similar mission failed to return and its status is unknown. Things do not go as planned and a quite shocking sequence of events await them in space, something even the best brains on the planet could not imagine.

I really enjoyed this novel, even though it was hard initially to get over the narration by one of the twin scientist brothers sent into space. He "won" the lottery; his brother stays on earth as mission control. Both are quite unlikeable: very clever but very "nerdy", probably autistic. However, the story takes off and it definitely keeps your attention.

The front cover blurb comparing this book to the film Gravity ("If you liked Gravity ...") is ridiculous but another blurb gets it just about right : Creepy and compulsive. This is definitely creppy and even horrific, an unsettling sequence of events that takes us into the Twilight Zone.

I do have one complaint here. Apparently, this book is book two in a quartet, but this fact was well hidden. It seems that the first book covers the original, lost mission. I don't think this matters in the end, The Echo seems to work standalone. But a bit annoying nonetheless.