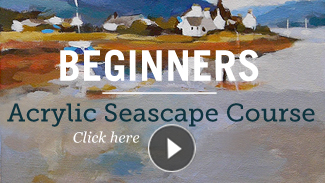 Another week and another painting exercise to bore people with! Not that I'm actually managing to spend a lot of time painting really. Every little seems to count though.

My latest is another from Will Kemp, this time a course, bought and downloaded.

The finished painting completed a week ago - a Scottish island landscape (click for a larger version) : 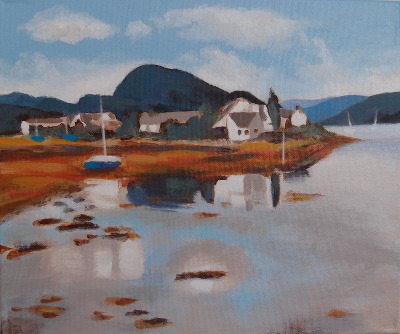 This is actually the second of two I did of the subject because I messed up the sky in the first version and started again (since "fixed, see below). The second stage of the painting was an optional addition of some "vibrancy" to the sky (which worked well) but the last stage started by toning it down again, which I screwed up (clouds went badly wrong, "plastic") ...

OK clouds (before my last stage) :

They turned much worse as I tried to fix them, the acrylic making the surface turn quite "plastic" as I covered the canvas and lost its traction. I put the entire painting aside in (temporary) disgust ...

I "fixed" the sky in the first version later whilst doing the second version : 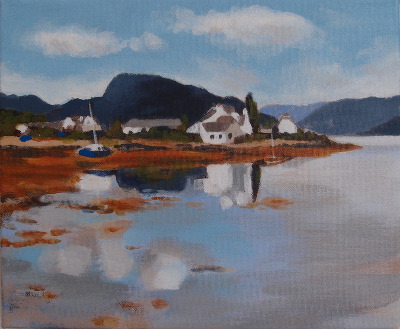 Once again, I'm fairly happy with the outcome, although it was a bit up and down. I have to stress "fairly" there however because it didn't turn out as good as I hoped.

I found the hardest part being the clump of houses on the right, the layout and geometry of the roofs and walls. I couldn't get it quite right even though the drawing looked OK. Maybe my brushes were too big? But then Kemp's a believer in using larger brushes! Then again, it's not a photograph and it doesn't matter too much - it's impressionist.

Also, I find it hard not to paint to the tutor rather than the actual subject of the painting, paying more attention to what the teacher's doing than the reference picture. Hard to avoid in this sort of situation really but you don't always need to do everything they need to do really.

Right now it's a positive to follow the course whatever the style because the aim is to learn the basics and feel comfortable with the medium, but it's hard not to stray. In past years (long past!), I was much more of a detail person, so struggle not to jump in and get too involved too soon (as Kemp warns against).

One thing I noticed this time around was how hard it is to calibrate the colour between the computer/tablet screen and my inkjet printer for the reference photo. I used a tablet to display the reference in the end because I just couldn't get proper colours printed. This is very like the problems cinema film colourists face when grading films.

I'm enjoying all of this so far anyway, even though it's frustrating sometimes. When it all comes together it's absolutely great. Art's the incessant search for the sublime, as someone like John Ruskin might have said. Or at least something you can give as a present without embarrassment.