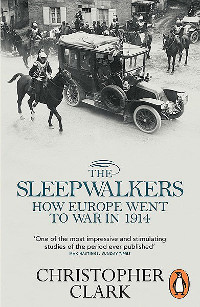 Who started the First World War? This is something that Christopher Clark, an Australian historian, considers in his recent book The Sleepwalkers. This year is the centenary of the start of the "war to end all wars" and his book has been very well received.

So who did start the war? Lots of people, some eminent, have expended a great deal of time, money and effort trying to determine the answer to that. It's proven very hard to nail down. For a start, this is not an exact science, but a lot of pre-war action and debate has been hidden, obfuscated or forgotten as well.

Clark assigns blame very liberally, with no one really understanding what a calamity the war would be, and no one realising how long it would last. The world was different and the power blocs were increasinly locked into alliances that set rigid "red lines", promising aggressive action (i.e. war) that should never have been countenanced before. Much less flexibility. Everyone seemed to consider themselves as having their backs to the wall and seeing their behaviour as defensive, even as their armies crossed national borders.

Like many boys, I was fascinated with war, battles and the two big wars of the 20th Century. But the books I read were much more interested in the actual fighting of the war than their causes. In fact, my most abiding memory now of this history is more the literary, and the great war poets like Wilfred Owen.

This book definitely shatters a few myths however.

The biggest one is that Germany was the primary cause and the major aggressor. It is hard to read this book and still believe that. Although it certainly bore much blame, in the hierarchy of causes, France and Russia sit as high, or even higher. And let's not forget Serbia, a nation dreaming of a mythical past glory almost within its grasp again, reuniting a Southern Slavdom under its leadership. Willing to use every underhand and odious means to progress this e.g. The Black Hand.

Yes, lots of blame to pass around. A good book and a useful reminder that history and propaganda are sometimes far too comfortable bed-fellows.