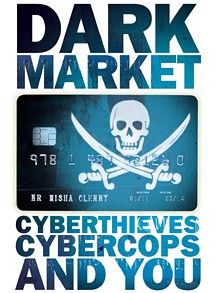 I bought Dark Market a couple of years ago and am ashamed to say that I only just got around to reading it. I say ashamed because it was quite riveting as Glenny puts together a hike through some of the darker fringes of the internet.

The book covers the emergence of the online "carding" forums: web sites for the discussion and dissemination of the tools and knowledge to take part in crimes like credit card fraud, ATM and card skimming, phishing and botnets. This sort of criminal activity has a long history now but far from being the preserve of the amateur hacker nerd doing things for reputation or kicks, it has grown into a very major, global criminal enterprise. Think Mafia. Think professional criminals and some very nasty people, sometimes even affiliated with state or secret security services. Rich pickings are available and it's usually hard to investigate and hard to prosecute.

Of particular relevance just now, the book starts in a particular time and place: the mid nineties and Ukraine. With Russia, the post-Soviet Ukraine became a ground-zero for a massive amount of criminality, including internet fraud. Under the radar of most, a huge illegal industry grew in Ukraine and for many years the people involved seemed to be untouchable, protected by bribery and corruption. This stuff if far from being the preserve of script kiddies or amateurs laughing at authority. 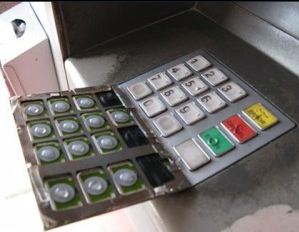 Brian Krebs is mentioned in the book and has a very good web site if you're interested in this stuff :

Including a series all about ATM skimmers. Be careful out there!

The King in the North, by Max Adams.

There's a scene in the first season of the TV series Game of Thrones where Robb Stark and his followers debate their next move now that his father is dead. War looks likely and the son is heir to House Stark and lordship over the northern kingdom of Winterfell. The scene ends with him being acclaimed as King: "King in the North!". A rousing scene, and adds some power to is the fact that all the voices you hear actually have Northern English accents.

This crossed my mind when I saw the title of Max Adams' book about England's dark age northern kingdom, Northumbria.

Having read and enjoyed this book, I can see many parallels between the world George R.R. Martin creates for his series and the world of post-Roman Britain in the early 7th Century. A real Game of Thrones plays out, as competing Kings, Warlords and peoples battle it out for supremacy over Britain, or as much of it as they can hold.

Adams tells the story of Oswald Whiteblade, who returns from exile in Dál Riata (in what is now North Western Scotland), to win a battle and claim the throne of Northumbria in the year 634. Northumbria, the unified kingdoms of Deira and Bernicia, stretched from the Humber (Hull, Grimsby) all the way up to Lothian in Southern Scotland at this time. 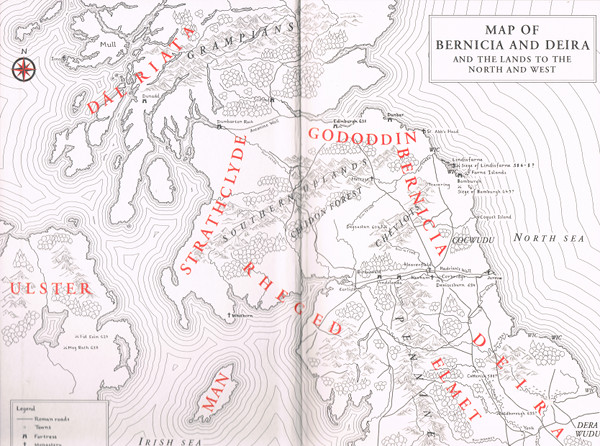 Map from the book.

The 7th Century was particularly important for Christianity in Britain and much of what we know of the times was set down by the monk and historian Bede. One of the striking aspects of Adams' history is how important the Irish missionary work was to the restoration of the faith in the years after the Roman withdrawal. St Columba (or Colm Cille as Adams calls him) had made a much surer and deeper impact in the north of the country and this was cemented by such deeply religious men as Aidan. Aidan was the founder and first bishop of the monastery of Lindisfarne, a daughter institution of Columba's Ionan monastery. Oswald spent his early years as an exile in Dál Riata and his Christianity was Irish and British rather than Roman. 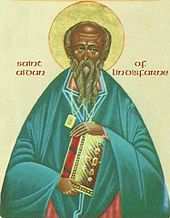 This is a well written and interesting book about a subject that seems to have almost faded from history today. A world where Britain had its own warring states period like the Chinese, although "state" is not really the right word. As Adams says, when the King or Warlord died (many in battle), their Kingdom would often fall apart. Oswald met a particularly grisly end in life. His afterlife has been very illustrious however: veneration as a saint.