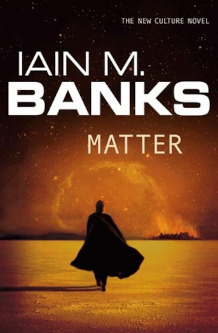 Well, this was the last of Banks' Culture novels I had to read. Now I've read it and really enjoyed it so I'm sad about that.

A quick overview : The story's about a coup in a royal house on a shellworld planet, one of a number in the galaxy created aeons ago for an unknown reason by an unknown race of aliens (there is speculation). The coup takes place in an industrialising but still fairly primitive society on one of the "levels" that exist on the artificial world. This happens during a war with the next level down. We follow a prince of the fallen house and his man-servant as they search for help recovering the throne from the world's manager species, then up the chain to the management's "mentors" and beyond them to the "involved" races. The levels travelled are literal (up the "shells") as well as figurative: civilisational and technological advancement. It might not be a coincidence that an archaeological dig is uncovering something very ancient, unexpected and dangerous on the newly conquered level below.

It is a bit of a tour de force, seeing the fresh wonder of the superior technology as it gets more and more magical. Luckily, the prince has a sister, long ago apprenticed to a Culture ambassador and sent off-world for a higher education. She has many of the usual Special Circumstances agent improvements. It is all a lot of fun following it all.

In a sign of a good book, I would have liked to have known a little about the aftermath of it all. I also missed that the book had a few appendices until I got to the end. In many respects this is one of Banks' best Culture novels and it covers a lot of what's special with them. The unbelievably high technology (post singularity), the odd, interesting and often very flawed, alien species, the dynamics of a post-scarcity economy (no money needed) and the repartee (usually between an intelligent robot and human SC agent).

I will have to read some of them again I think.