Below is a screen capture from a short YouTube video, an interview with David Hockney. The video's only about 4 minutes long and he's talking about the state of his art and the world. As usual, good sense and humour from him.

I don't think I can get such bright, almost neon, colour in my painting! Mine aren't backlit though. 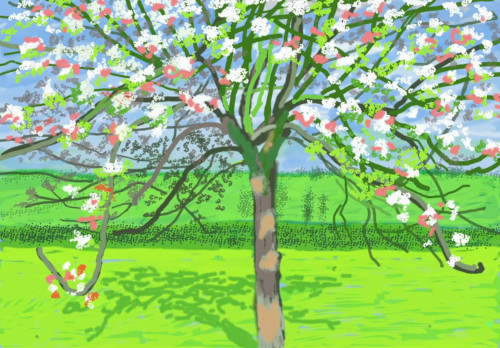 He speaks of a philosopher he saw talking on television: the news comes on and he's asked how he can be optimistic with news like this? He replies, well, that's television. Bad news sells. So he's asked, what's the good news then? And he replies ... the arrival of spring. Hockney chuckles and it's a typical Hockney observation (about "observation" itself).

he says, of course nobody notices spring arriving usually but in the past, everyone noticed. In 2020, I think many more people started noticing as well. And now it's summer. End in sight of the "crisis"? At least the beginning of the end. 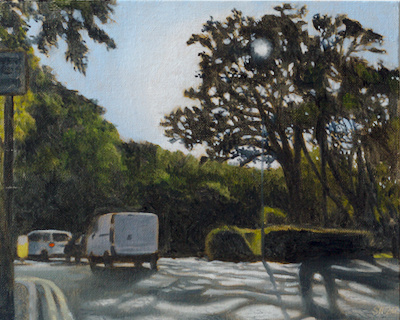 I painted this a few weeks ago, the "hook" being the light through the large tree casting a great mosaic of a shadow on the road. Not a particularly complicated picture and it came out fairly well. Unlike some other paintings recently though. In fact, a week or so ago I was having a lot of trouble sitting down and getting anything done. Some days are like that, and it can definitely cast a bit of a depressing shadow itself. Very frustrating. Luckily, I managed to break the spell last week. Hopefully for a while.

The National Portrait Gallery in London are hosting the BP Portrait Award show online this year and have created a virtual gallery in the web browser. I had a poke around and it works very well, although I think I heard my laptop fans start to spin a bit faster. A "virtual" gallery like this is not bad at all but no substitute for real life. I'll be having a "stroll" around it and checking out the pictures, almost as usual. The painting just in the above frame to the left is the 2020 winner. 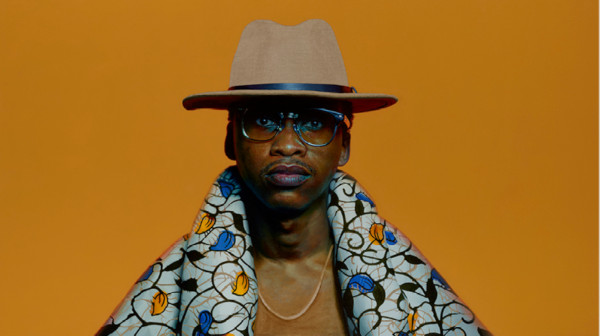 I hope the London gallery does the virtual display like this every year. I was very disappointed that 2019 was the last year the BP Portrait Award exhibition would be shown in Edinburgh. The Scottish National Portrait Gallery decided they did not want to host anything sponsored by BP, an oil company. I'm opposed to that decision and feel a loss. I bet a lot of people do. Edinburgh's loss.

Four years ago, the Royal Academy had an exhibition I reported on called Painting the Modern Garden ("Monet to Matisse"). I enjoyed it immensely (I think I went twice): the RA know how to put on a great show. The Monet water lilies in the last room were like being before an altar. Quite magical.

The Academy have just put their film of the exhibition on YouTube. Beautifully produced and full of colour as you would expect. This is worth putting up on a big screen and sitting back to wallow in: much art and beautiful plants.


And Another Fresh View

From the same day as the previous work. I liked the view a lot and did another small oil painting of the view of the city over Inverleith Park pond. 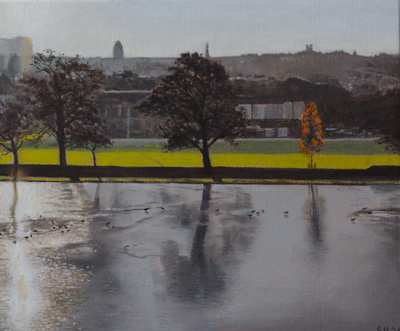 This is a study I painted in December 2019, based on a reference photograph from earlier in the month. A lovely cold and fresh morning, frost on the ground. The pond was mainly frozen and birds were standing around on the ice. It came out well I think : 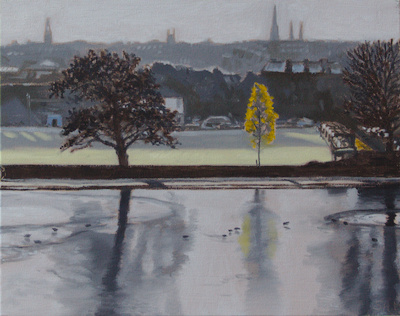 No visits to the Mall Galleries this year either! This is the gallery I think I miss the most. This year's Royal Society of Portrait Painters exhibition is on and we've all got the email alert. Great paintings, online only. It really does pay to take some time to have a look through them.

Darren Butcher's painting shown below could be called caricature rather than portrait. Does it matter though? Very well painted anyway and there's an Expressions Two as well. In fact, there are a lot of new artists in the show this year, as well as the usual ones I remember and love. 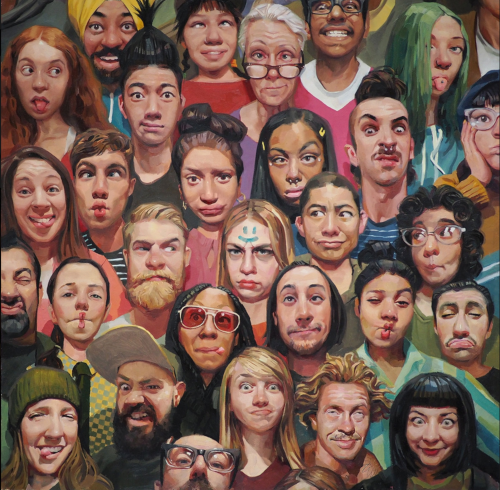 The portrait below is by Alex Tzavaras. He runs a good YouTube channel called SIMPLIFY Drawing & Painting where he teaches painting technique and does some artist interviews. 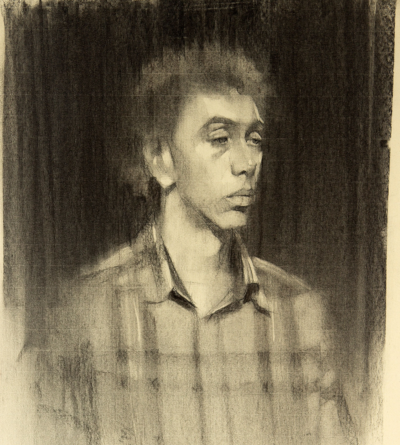 It woud be great if the various painting societys and groups could work out a way to take their exhibitions north of the border each year as well somehow.