The word tome means large book. I think Codex Amiatinus is the largest book I've ever seen: an Anglo-Saxon bible a foot tall. Quite exceptionally large and a beautiful piece of work from 1300 years ago, it is the oldest surviving, complete Latin Bible in the world. 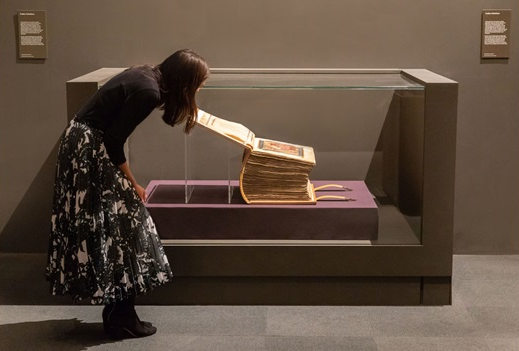 Made at the monastery of Wearmouth Jarrow in the North East of England, it is back in England for the first time since it was sent over to Rome as a gift to the Pope. The British Library exhibition Anglo-Saxon Kingdoms is a show full of books and writing, and a fascinating journey back to the beginnings of the English language. I just wish I could understand it better.

Swaffham holds an Visual Arts Festival every year, including an exhibition. There are always a lot of bad pictures on show but often a lot of very good ones as well. The "bad" art is generally no worse (and maybe better) than some stuff you'll see at the Summer Show. The Swaffham show is for charity and always worth a visit. I sometimes seriously consider buying something and this year was no exception.

Like last year, one of the people with a small display of ceramic work was Jane Bygrave. A Norfolk artist, she creates some lovely little ceramic figurines. Quirky, with a lot of character.