A few financial or property bubbles around just now: Sweden has a bit of a housing bubble, Australia as well. The Economist has an article about another one: Bitcoin. 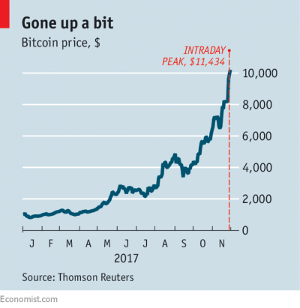 One bitcoin has jumped in value from $1,000 to over $10,000 this year, making some people very rich indeed. That's if they can sell them because it's not such a liquid market. As the article says about each Bitcoin transaction :

Each transaction has to be verified by “miners” who need a lot of computing power to do so, and a lot of energy: 275kWh for every transaction, according to Digiconomist, a website. In total, bitcoin uses as much electricity a year as Morocco, or enough to power 2.8m American households. All this costs much than processing credit-card transactions via Visa or MasterCard.

There are people who are starting to worry about whether bitcoin mining will impact "climate change" plans. As for bubbles and their end-game, they also note :

Some remember Nathan Rothschild’s remark about the secret of his wealth: “I always sold too soon.”