A few weekends ago, I happened to walk past the Cartoon Museum near the British Museum. I've often thought about visiting (when I remember it exists) and saw there was an exhibition on called Future Shock! 40 Years of 2000 AD. I have fond memories of 2000 AD, so this was a great opportunity to have a look at the place. 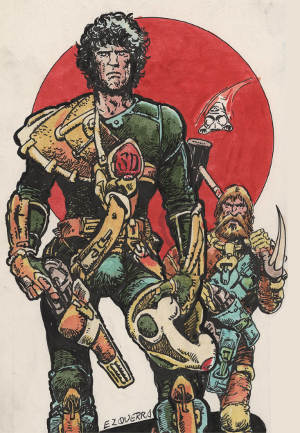 I just about remember buying the first issue of 2000 AD and was hooked. It came out in 1977: an annus mirabilis for science-fiction fans and small boys (Star Wars was released the same year). Saturday mornings stepped up a gear. There was another man in the museum with his children and I mentioned buying the first issue to him, and he said he had as well (they had issue number 3 on display I think). 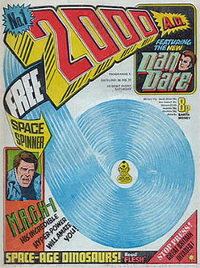 With 2000 AD costing 8p, I also remember the shock I had getting to the counter at the big London comic book shop Dark They Were and Golden Eyed (in a much seedier St. Anne's Court) and realising I couldn't afford the comics I wanted (at all of 35p each, if I recall). The difference here was they were US imports. My grandad didn't have an extra couple of pounds on him either, if I recall, and no plastic cards in the wallet either. Those were the days, and Soho's changed a lot since then as well (never mind inflation).

For Star Wars, I remember the special trip (twice) to London's Leicester Square to see the film and being awe-struck with it, from the thunderous first shot through the big cinema sound system. Science-fiction and comics are so mainstream now but back then it was all very new. 1977 was the birth year of a massive new media industry of films, comics, TV and technology. Back then there was no internet, and only three TV channels; now we have wall to wall media saturation. In some ways, not altogether better for it.