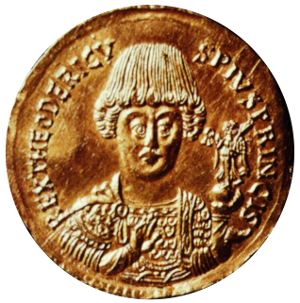 Not a book review (yet), but I have been reading Peter Heather's history of the early medieval period, post-Western Roman Empire, The Restoration of Rome, and finding it very good. Heather's got a way with words sometimes, putting events of the day into familiar terms, sometimes quite amusingly. It might jar sometimes, but he gets away with it because his book is good history with his own research behind some of it.

Right: A medal minted by Theoderic, King of the Ostrogoths and ruler of Italy, early 6th Century.

The period after the political demise of the Western Roman Empire was full of drama, including a lot of fighting and killing (not much change then, perhaps). This included intra-family decimations. Take Clovis, King of the Franks circa 480 AD. To achieve and cement his power, he killed a vast number of people, including perhaps seven rivals, some of them relatives.

From Heather's book, describing Bishop Gregory Of Tours history of the times :

How sad a thing it is that I live among strangers like some solitary pilgrim, and that I have none of my own relations left to help me when disaster threatens!

He said this not because he grieved for their deaths, but because in his cunning way he hoped to find some relative still in the land of the living he could kill.

So far, a fascinating book. Now we move from the Ostrogoth Theoderic to the Eastern Roman Emperor Justinian.