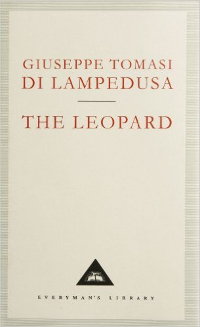 This edition of The Leopard is a beautifully produced hardback Everyman's Library edition. It is also one of the best novels I have read, and something I thoroughly enjoyed reading.

The book is set in Sicily during the 1860's, Garibaldi has landed on Sicily and the reunification (Risorgimento) of Italy has been set in motion. Centred on the aristocratic family of Don Fabrizio, Prince of Salina, as he struggles to come to terms with the new order and the changes that arrive in a traditional and rural Sicily, the book is funny, sweet, sad and extremely well written (and therefore translated). This is a novel I realised I wanted to savour from the start and was sad to finish.

The introduction by David Gilmour is also well worth reading, as he gives a background to the author. The Prince of Salina, family and household is based on author Tomasi di Lampedusa's similar trajectory :

.. from wealth to penury, from influence to impotence, from an abundance of male descendants to sheer physical extinction. The last Prince of Lampedusa died, childless and impoverished, in Rome in 1957. He left few possessions except the manuscript of a novel which had recently been rejected by two leading Italian publishers".

Similar rejections of what turn out to be classic works is familiar. One wonders how many wonderful works might never find an audience, but must be very grateful that this one did. A wonderful book: I cannot recommend it highly enough.