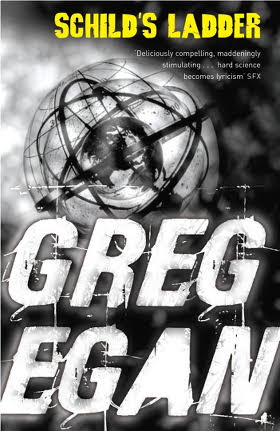 Egan's science-fiction is perhaps the wildest and most speculative stuff I've read, but the wildness comes at a cost: sometimes a lot of exposition of the maths and physics behind it all. Schild's Ladder is a case in point: I have to admit to skimming some of this after a while but still enjoyed the book. This novel perhaps pushed the "hard" science a bit more than usual, even for Egan.

In the far future, a researcher creates a state of vacuum more stable than our own by accident and it starts expanding inside our universe, destroying "normal" matter as it does (at half the speed of light). The novel has two opposing camps of humanity: those that want to reverse and destroy this novo-vacuum, and those that want to stop its expansion and study it.

Right now, both factions are on an outpost (seemingly) pacing the expansion, sitting in front of it and studying it. Fighting, a war of words at the moment. These are not your average humans though: essentially immortal because they exist as information that can inhabit flesh-and-blood artificial human bodies, inhabit artificial exo-skeletons or decide to stay incorporeal. Gender is fluid, AI ubiquitous and everyone seems to know a lot of math! The physics of the new matter inside the expanding new vacuum is described, as well as a mind-bending voyage inside to investigate its secrets. "Normal" space is fairly mind-bending as it is anyway but Egan can stretch things further when we get down to planck scale physics :

The Planck scale is the universal limit, beyond which the currently known laws of physics break. In order to comprehend anything beyond it, we need new, unbreakable physics.