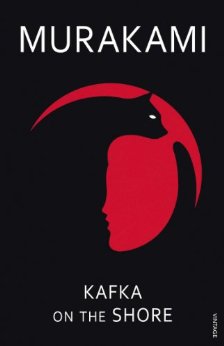 Kafka on the Shore
By Haruki Murakami

I decided to pick up one of Haruki Murakami's books and expected something a little different. That turned out to be true in this modern day story containing so many fantastic elements. Not just a taste of Japanese culture (some) but an odd tale mixing a road trip, a philosophical discussion about life, music and metaphors and an alternate world of magic and myth. As well as people that can talk with cats.

There are two alternating stories which intersect at the end. One follows a fifteen year old runaway, with an odd curse and prophecy from his father; and the other has an old man, simple-minded after losing everything he knows in a childhood accident. The old man is Mr Nakata, unable to read or write but with the special ability of being able to communicate with cats. After a particularly bad day involving a bad man who looks like Johnnie Walker (of whisky fame), he ends up on a quest to fix an old problem. Actually, describing this "quest" and the reasons for it is not easy; one of the problems with the book is that I'm not really sure what a fair amount actually means. There's depth to it, and mythic or fantastical happenings, but much was beyond me. I enjoyed some of the "intellectual" interludes - discussing the meaning of metaphor in life, Truffaut's cinema or the Archduke Trio (YouTube) piece by Beethoven - but they were quite unreal in some ways. It was so full of other meanings that it's the sort of book that needs a followup explanatory text book perhaps. In fact, as wikipedia says :

Metaphysics is also a central theme of the novel as many of the character's dialogues and soliloquy are motivated by their inquiry about the nature of the world around them and their relation to it.

So, there you go. It sounds heavy, but isn't too bad.

Having said this, my mystification was balanced by the charm and oddness of the old man, Mr Nakata, and his companion Hoshino, a truck driver who drops everything to help get him across Japan and complete his mission. Nakata and Hoshino are funny and sympathetic characters ("Nakata isn't very bright"). Hoshino's not the brightest bulb either, but his slow realisation that his life has been pretty meaningless until now, and the way he starts to see the world differently, is one of the highlights of the novel.

The reason for a score of 3.0/5.0 is only that I found some of the boy's story a bit stilted, and there were odd sex scenes that seemed out of place

A book I quite enjoyed then and I'll definitely try another sometime.