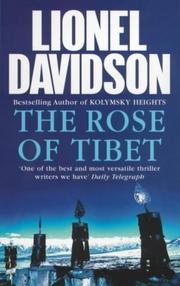 The Rose of Tibet
By Lionel Davidson

Lionel Davidson was a British writer whose first novel, Night of Wenceslas, was published in 1960. His second, The Rose of Tibet, was published in 1962 and I recently finished reading it. He wasn't very prolific, and sometimes took a long time to produce a new book (e.g. 14 years before his last), but he is considered by quite a few people as one of the best novelists no one has heard of!

The Rose of Tibet is a classic adventure story really, about an English teacher who travels to Tibet, sneaking in to the closed country to search for his missing brother. The year is 1951 and dark portents and prophecies are everywhere in the country, as China readies itself for an invasion. We not only have a Chinese invasion, but a beautiful abbess of a remote monastery, a fortune in emeralds, hidden secrets, monkey gods and a desperate survival strory. This sort of book would make a great film, perhaps in a similar spirit to an Indiana Jones.

The Rose of Tibet (1962) is Lionel Davidson’s second novel. His extraordinary and thrilling tale of a haunted land is among the very finest of its kind and prompted Graham Greene to remark: ‘I hadn’t realised how much I had missed the genuine adventure story until I read The Rose of Tibet ‘. Its combination of adventure and travelogue is further proof of Davidson’s great variety as a writer, and caused Daphne du Maurier to say: ‘It has all the excitement of King Solomon’s Mines ‘.

I'm with Graham Greene on this: it's very refreshing to read such a cracking adventure story again. I am looking forward to reading more.

I think the books are out of print, which won't help gaining an readership. I read mine as an e-book but definitely want to see paper versions. They definitely deserve better. I was struck by the extremely glowing reviews I came across a few years ago on the web for this book and his first.