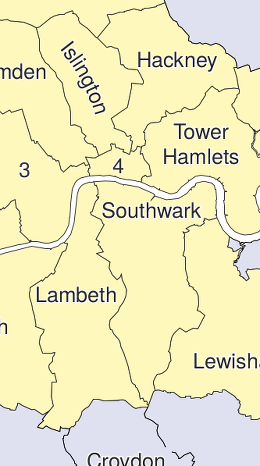 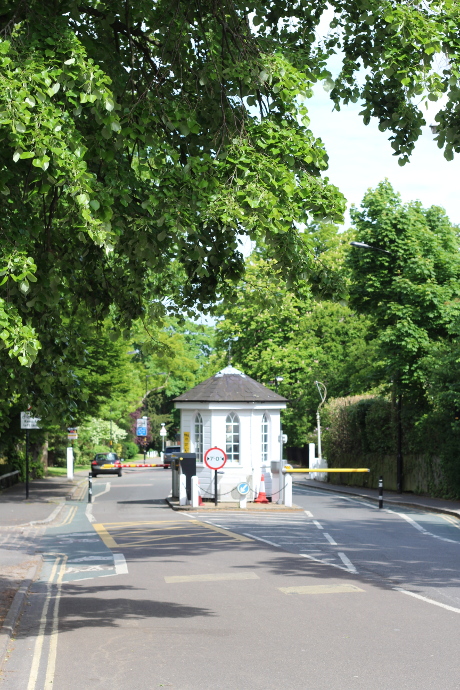 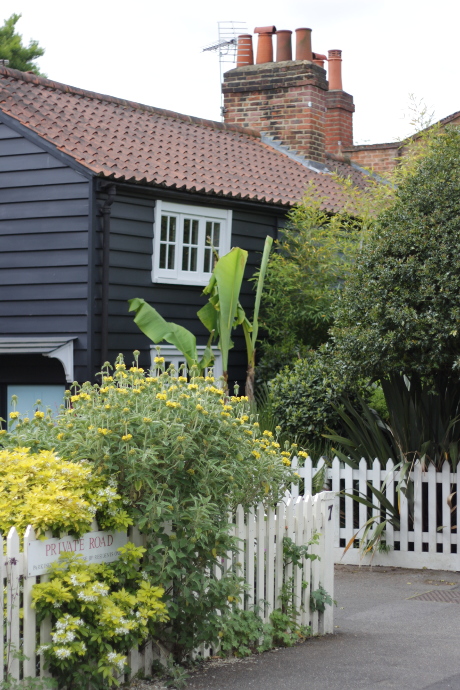 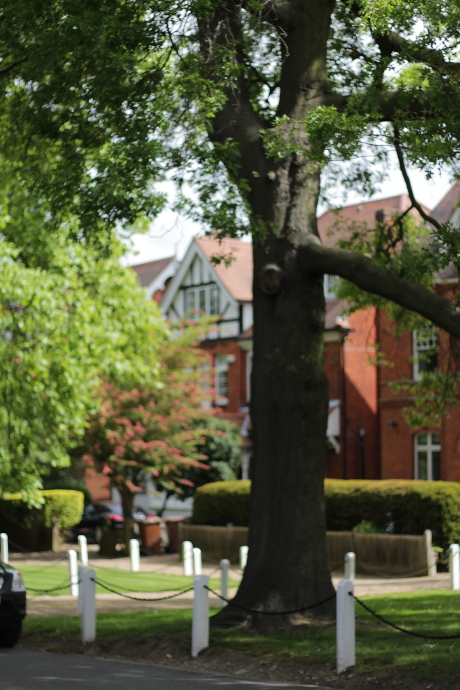 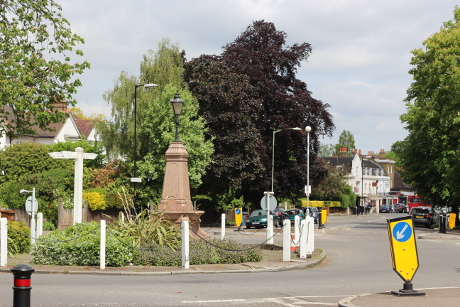 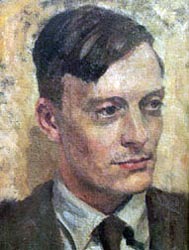 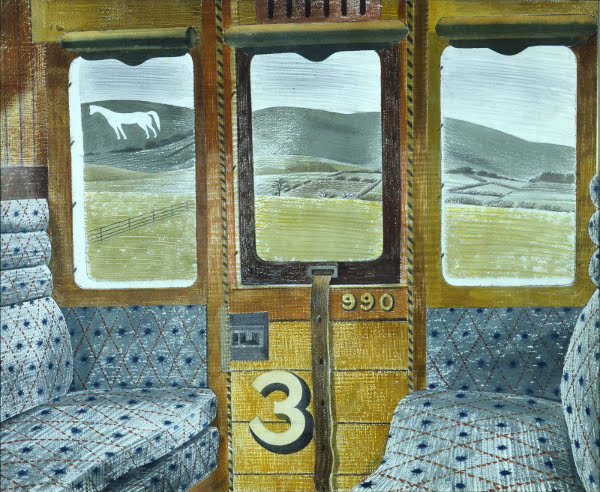 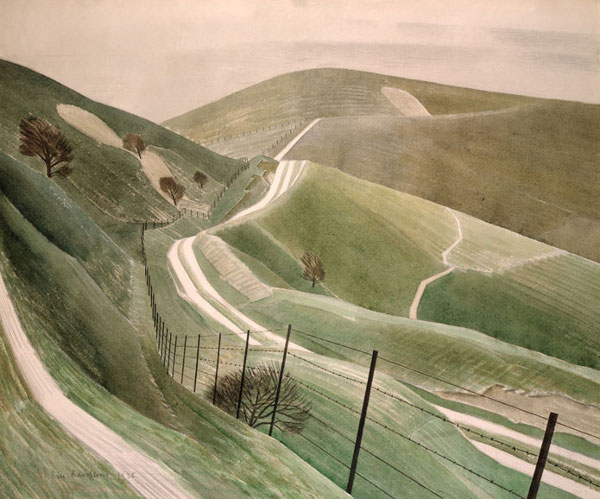 Britain After Rome
By Robin Fleming 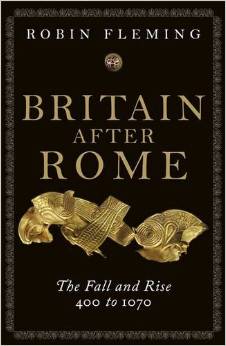 I mustn't let this book slip by without a short mention. Britain After Rome covers the period from the early 400's to the mid-11th Century in pre-Conquest Britain. From a peripheral part of the Roman Empire, we move into a very different world of British, Romano-British, Germanic and Scandinavian "interaction". Fleming has written a detailed and semi-academic book with some real history backed up by actual archaeology.

A little tough going at the start but as she says in the introduction, she wants to try and concentrate on the archaelogical record to uncloak as much of the ordinary life of the people of the period as possible. This means less concentration on the great lives, or written sources (such as they are) and more on burial custom, building and economy. Fleming only briefly covers Wales but this an interesting section on how the Viking micel here (Great Heathen Army, arriving around 865 AD) affected the Welsh kingdom of Brycheiniog.

Scotland and Ireland also figure less prominently although another interesting section covers the possible reason for finding the remains of a 9th or 10th century Yorkshire woman in a Viking/Norse cemetery in Cnip, Isle of Lewis :

How did an English-woman end up living at the center of a vast, Norse-colonial, North Atlantic world with a group of grave-goods-using Norse settlers? The most likely explanation is that viking slavers derailed her life in some unrecorded raid and, as a conequence of it, she spent her final years among foreigners who owned her.

One is often reminded about the ubiquity of slavery through-out history. 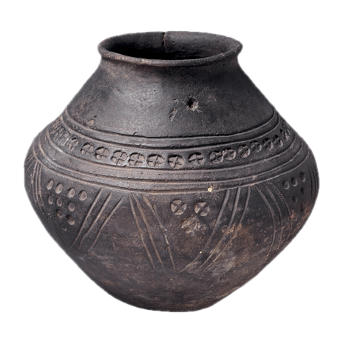 On the left: An Anglo-Saxon burial urn. The body was cremated and then placed in the urn and buried. There was a great variety of burial custom in use, including cremation and inhumation (burial of body in ground, either directly, or in a coffin of some form). Grave goods got less common as christianity took hold.

This is a book worth a read by anyone seriously interested in what might have happened in Britain during the six centuries that passed before the country's reintegration to the continent as part of the Duke of Normandy's domain.

There is no shortage of advice around; books or web sites offering all sorts of helpful thoughts on how to live a good life, be happy, fulfilled. How to live without regrets.

I don't tend to linger on this sort of thing but occasionally something comes along that I think is worth the read, and worth passing on. Sam Altman, a silicon valley entrepreneur, programmer,venture capitalist and blogger, recently wrote something that triggered this reaction :

The Days are Long but the Decades are Short

2) Life is not a dress rehearsal—this is probably it. Make it count. Time is extremely limited and goes by fast. Do what makes you happy and fulfilled—few people get remembered hundreds of years after they die anyway. Don’t do stuff that doesn’t make you happy (this happens most often when other people want you to do something). Don’t spend time trying to maintain relationships with people you don’t like, and cut negative people out of your life. Negativity is really bad. Don’t let yourself make excuses for not doing the things you want to do.

Number two is fairly standard, but still needs saying again sometimes, and pondering on occasion. Some other points he makes are more aligned with work, perhaps even the type of startup culture he moves in, but this culture also tends to infuse many more places that just Silicon Valley nowadays.

More at the link. 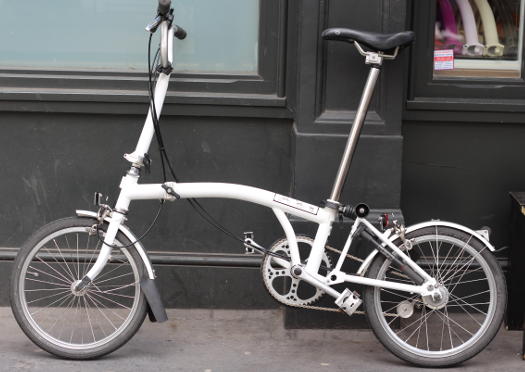 Well, it is possible to get a dirty, greasy five year old white brompton clean, it just takes T-Cut and Turtle Wax. Plus a lot of elbow grease.

I put my white brompton into Brompton Junction for a service (turned out to be the "factory service") and it came out sparkling. I could never get it like this; never managing to get all the grease and grime completely off. A discussion with one of the engineers let me in on how they do it. But as they said: a lot of hard work as well to polish it up.

The engineers in the shop not only know their stuff but are also very happy to help out and answer questions.

Of course, now I want to avoid showers as well, and mud. I've failed in that already this week. 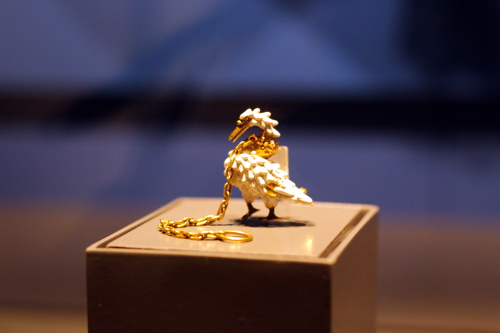 What a nice surprise seeing how many of Mary Pym's paintings have the "sold" red dot beside them at her show at Llewellyn Alexander. Maybe more than 80% snapped up, some buying two.

I can see why people like them: they have a modern, semi-cubist, cézanne-like look, paintings that could look great on many modern walls. 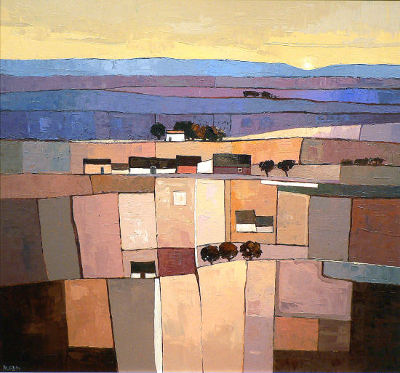 Mary Pym, Moon Over the Inlet : 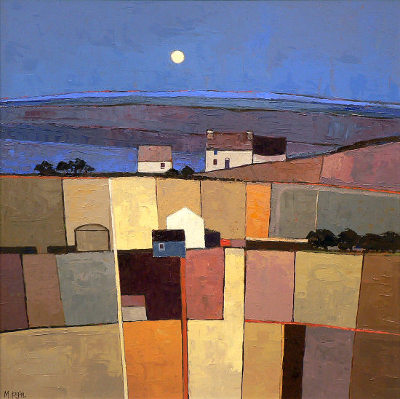 She certainly has a style.


The Lion of Swaffham

A new painting from a photograph I took on a bright, sunny morning in December last year. The painting : 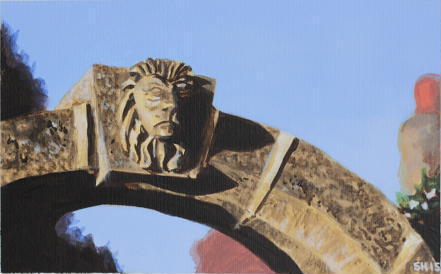 This was painted on Fabriano 400g/m2 acrylic paper which is quite thick and heavy and seems to work well, (although I was not painting very thickly). One advantage to using paper like this is that it's easier (and cheaper) to frame if you want to.

On the day, the sun was out and the sky was a nice strong blue against an unusual stone lion sitting on top of the arch of someone's gate. An interesting detail and worth a photograph. Worth a painting? I think so, and I'm quite happy with it. 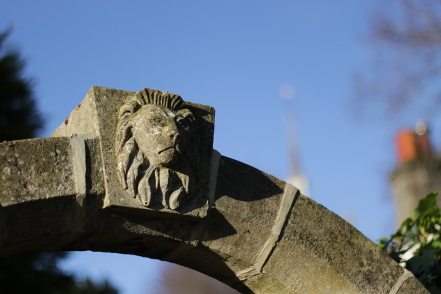 Some artistic liberties taken of course (a few known as mistakes) ...


The Tudors Peter Out 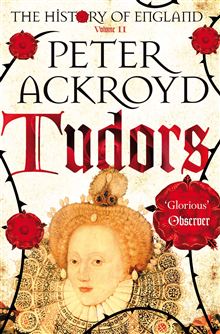 After all the Mantel and Cromwell, have I reached Tudor overload? No, not yet. It's just a fascinating period and there's usually something interesting to learn, or a better way to say something.

Peter Ackroyd's book is the second in his history of England, and the first I've read. He's a good writer who loves his subject and this was no exception. It's quite a worn path, but he still manages to bring some fresh words to the story of the monsters: Henry VIII and many of his associates.

The 16th Century was the age that the outlines of the modern state started to become visible, if only in small ways (and not necessarily good ways). Although the next century saw a civil war, the Tudor century was as revolutionary: reformation, heresy, protestantism, dissolution and supremacy. A massive rupture with the past.

Great stories, and some classic of course, but it is hard not to come away with a severe aversion to an aristocracy that treated so many people so badly, and in such an arbitary way, Magna Carta or not.

Roll on the Revolution ...

Maybe "No Tudor overload yet" but also reminded that I've not written any thoughts about the recent BBC Wolf Hall TV production. I really have to get round to this. 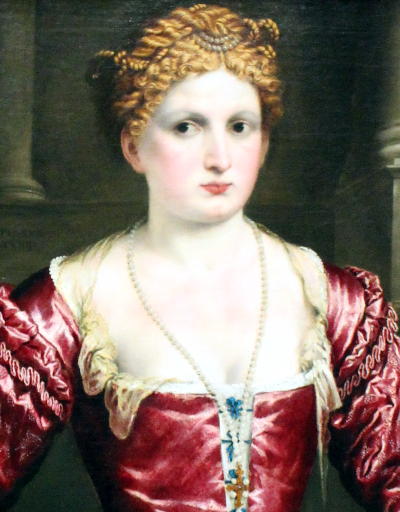 Portrait of a Young Woman
by Paris Bordone, around 1545.

A beautifully painted (sumptious is the right word) picture in the National Gallery by Paris Bordone. The better sort of 16th century girl didn't go in for a sun tan. Mind you, with hair as red as that, it might have been a bit dangerous as well.