Another painting, this the second of two (the same) I did a few weeks ago. Again, from a Will Kemp tutorial. 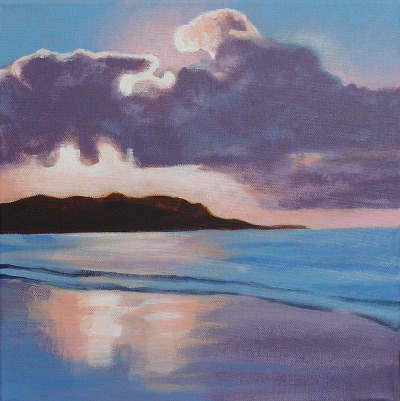 I did two because I wasn't happy with number one, but I'm not very happy with two either! (and this is why I debated whether to "publish" or not). In the end, why not?

It's a bit flat and unexciting, athough it is meant to be "painterly" i.e. not concerned with obsessing over fine detail etc. Maybe version three would be better but I lost interest in painting it! I never quite got the colours right (the oranges and pinks).

I've decided to try my hand at one of Kemp's paid lessons, so we'll see how that goes.

After doing this I did actually paint a little picture I'm very happy with. I won't display it here (yet) because it's to be a Christmas present. But painting something you really like is very satisfying.

The National Gallery used to be quite strict: no photography. Not even of the big Sainsbury Wing staircase. Now it's all change. Quite a surprise, but a pleasant one. If you read the post at the Evening Standard, you'll note that not everyone is happy though. According to the gallery :

As the use of wi-fi will significantly increase the use of tablets and mobile devices it will become increasingly difficult for our gallery assistants to be able to distinguish between devices being used for engagement with the collection, or those being used for photography.

For that reason we have decided to change our policy on photography within the main collection galleries and allow it by members of the public for personal, non-commercial purposes.

I'm pleased because I like to be able to take photographs, not just of pictures I like, but of the rooms and spaces in the building. Or even the people. I often like to use the photo as a record of what struck my fancy that day, maybe research later or put on the blog.

I'm not sure I see too many downsides: there are always people standing in front of or around the popular paintings, and taking a photograph takes little time. It's a bit depressing seeing how many people seem to only see the painting (briefly) via an LCD screen before quickly moving on to the next display though. Not really looking at the pictures really, other than snap ... snap ... snap. There are some noisier cameras as well as annoying people. But hasn't it ever been so? The gallery staff still have to shout out on occasion when people try to take pictures of things they're not allowed to (most things from private collections, perhaps copyright issues).

Anyway,now I can take pictures of some of the great paintings on display, including the edge of a well known Van Gogh, the Chair, and zoom in closely :

Look how rough the canvas is on the left, where it's bare of paint and meets the frame. It's almost like a hessian sack, and quite a shock compared to some of the smooth cotton canvas you buy in the art shop round the corner. It's a shame I can't run my finger over it to feel how rough! No wonder Van Gogh laid the paint on so thick sometimes.

And now for some watercolours ...

I came across Margaret Heath at the Llewellyn Alexander gallery at Waterloo and was struck by how beautiful her watercolours were. Some of the best I've seen : very technically and artistically accomplished. 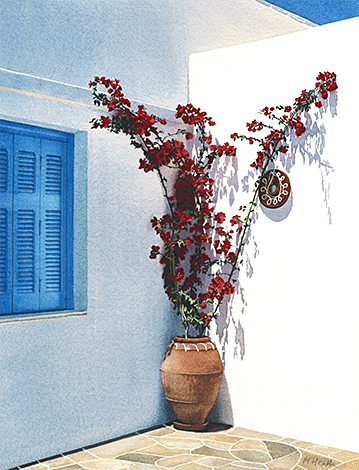 From her web site :

Her paintings show the transient quality of light, often early in the morning and late in the day, that can make a scene look so beautiful. To be on a beach or cliff top, alongside a harbour wall or Venetian canal, and to show the viewer how wonderful it looked at that moment is her reason to paint.

And this original painting goes for £695 : 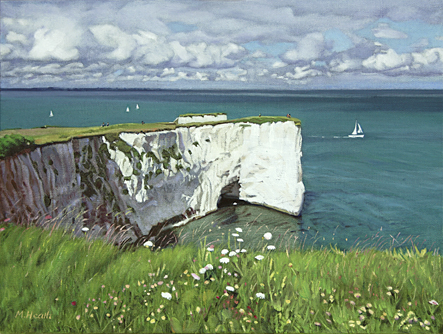 A lot of skill here and she really captures that special quality of watercolour art, the luminosity. Beautifully done.

Her web site has more : http://www.margaretheath.co.uk.

She will also be exhibiting at the Llewellyn Alexander gallery from 23rd October for three weeks,

I was at the Mall Galleries on Saturday to have a look at the Still Alive show, an annual show of "contemporary still life". This was the last day of the show.

A few of the artists I liked a lot, including some beautiful pastel painting by Ann Wilkinson. She had three pictures on display, one shown below : 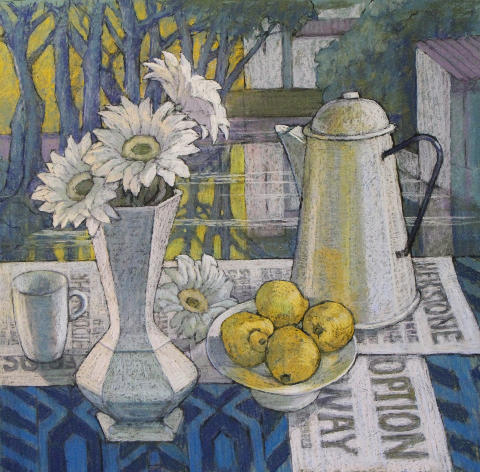 Still Life with Vase and Flowers 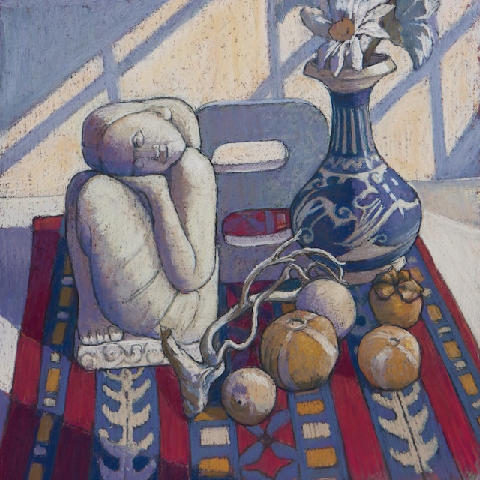 Her web site has more.

Their perspectives on art were as disparate as their backgrounds. "Although Renoir’s first impulse to paint came from an almost naïve sensuous delight," Clark wrote in the Burlington Magazine, "he never imagined that the mere representation of agreeable objects was the end of painting." Keating begged to differ. “He loved young girls,” Keating told TV viewers. “Don’t we all?”

The above quote is from Jonathon Keats in Forbes comparing Keating's outlook on art to someone like Kenneth Clark (Baron Clark), of Civilisation fame. Tom Keating, the famous art forger, was pretty down to earth, one of the reasons people liked him. 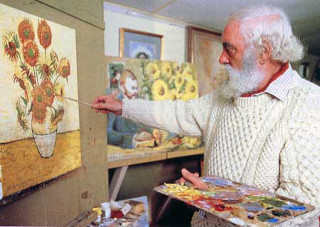 Keating died over thirty years ago but before he died he recorded a short series of TV programs for Channel4 called "Tom Keating on Painters". I think we are very lucky that he did these, and luckier that most have been uploaded to YouTube because they're fantastic programs for those interested in the techniques of the old masters.

The uploaded videos look like VHS quality, so not great. They also have poor audio (I need to crank the volume quite high) and bad subtitling unfortunately.

Leaving aside the transfer quality, what comes through is his enormous depth of knowledge on how these painters worked, often an extremely laborious process hardly used at all anymore (and with the knowledge increasingly lost). He knows what he's talking about and talks about it with great wit as well.

It's amazing how bad the paintings he does look at some stages, before clearing and becoming recognisable. At some points, it seems hard to believe the artist can recover the work having seemingly destroyed it!

A couple of good articles by Jonathon Keats describe his life and work (apologies for the poor interface in these pages) :

Another painting, and again following a Will Kemp Art School lesson, this time How to paint like Monet.

The good thing about lessons like this is that you don't have to worry about choosing a subject, or composition, what colours to use or even what brushes: it's all chosen for you. Easier to get started and actually do something. Starting is often the hardest part. 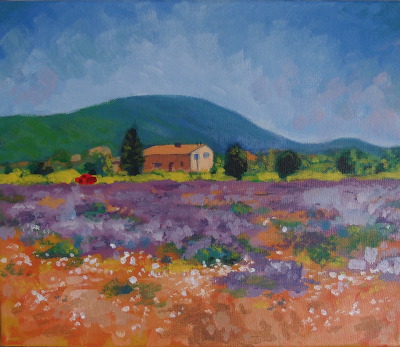 OK, not quite a Claude Monet, but I'm quite pleased with the way it turned out. A bit "tighter" and fussier than I'd like (and definitely more than Kemp's) but not bad.

I was never much of a landscape artist, preferring figure work, but right now the landscape suits me fine. The painting is also a lot looser than I'd ever do before. I would never have left the edge of the hill fuzzy, let alone smudged! No visible brush strokes if possible either. Of course, impressionism is often all about brush strokes.

And this was one of the points of the exercise: try and stop being too fussy and precise. Something I have to strain against is the desire to have the painting look good at every stage. It almost never does, often looking quite the opposite (crap) at the various stages it passes through (and this painting definitely did). It's hard but you have to put that aside and concentrate on what you're working towards. Something good hopefully.