A strange word that caught my eye in the title of a BBC Radio 3 feature a few years ago, In Search of the Gododdin. Reading the summary piqued my interest even more : 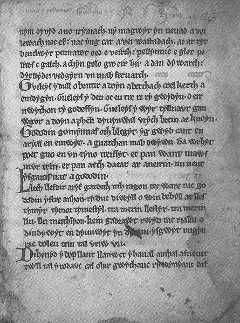 Fourteen centuries ago an elite band of three hundred warriors set out from Edinburgh and marched south to Catterick in Yorkshire to meet a force of 10,000 Saxons in a bloody pitched battle. At the end of a week of ferocious combat all but three of the 300 lay dead and, with them, the last hope of the Old North - the original Britons - against the Saxon invaders. But the battle left an enduring literary legacy: one of the three survivors, Aneirin, fled back to Edinburgh and composed the Gododdin, an epic poem to commemorate his fallen comrades.

Of course it's not quite as simple as that, and we have to leave aside the numbers, but what an introduction to something I'd not only never heard of, but had no idea of a context for.

An epic poem called the Y Gododdin, written in early medieval Welsh, perhaps written in Din Eidyn (Edinburgh) and commemorating a battle in England between Britons and Angles.

There's a massive amount here we don't know for certain, a lot of conjecture, myth. We learn a standard history that often starts with the Romans, skips to a bit of Anglo-Saxons, jumps to the Normans and from then it's a quick romp to Empire and the Victorian 19th Century

There's much less certainty in the "Dark Ages" but we have to remember how much of our history is buried in odd corners like the Y Gododdin and the original tribes of Britain. These tribes didn't go away and were not exterminated. They're still here.