I've had to re-write and re-post this after accidently losing the (completed) original (another post perhaps). It's always a bit soul-destroying when this sort of thing happens, but nothing to what happened to Thomas Carlyle's first volume of the manuscript of his book on the French Revolution, burnt by accident. 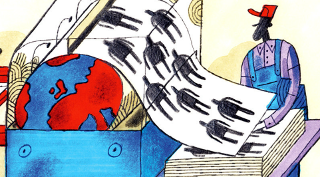 Peter Day's been reporting the world of business for the BBC for 30 years and he's recently written a BBC magazine article and presented a BBC radio show looking back at his experience over the years. Not only is he a good interviewer, asking intelligent questions, he's often concentrated on the technical changes in business. Mass production, new market strategies, the internet (particularly) and, more recently, the promise of 3D printing. On 3D printing (also known as additive manufacturing) :

I was in the offices of a company called Bespoke Innovations, with a designer called Scott Summit. He had gone into partnership with a surgeon to make individualised artificial limbs, using a 3D fabricator. Bespoke can match an existing arm or leg, or design a prosthetic limb to be eye-catching in its own right.

We'll also see these techniques making things like heart valves, bones and other internal organs in the future.

As a retrospective, he's talked to a surprising number of interesting people, sometimes before they and their companies became better known. People like Larry Page of Google (pre-CEO), Gordon Moore of Intel (of the famous Moore's Law, Peter Drucker, a management guru and Joe Kraus, co-founder of the now defunct early 90's search company Excite.

Excite was extinguished by Google a long time ago because Google figured out a way to make money from a much larger percentage of their customers than Excite could.

Reviewing this jolting experience a year or so later, Joe Kraus had by then acquired a significant insight into why Excite had failed and Google had triumphed. He talked about how Excite had been a 20th Century company seeking all its revenue from the top 10 companies in America, as media businesses had been doing for decades. But - and this is the upside-down revolution - Google structured its business around attracting the top million, or ten million, advertisers in the US.

This leads to a mention of Chris Anderson's long tail, a market phenomenon made possible by the reach of the global internet.

Day thinks that we might be reaching the end of the first industrial age and that a new one is starting. Its first gasp was the dotcom boom (and bust) in the late 1990's and millenium. But a lot of lessons have been learned since then and a clearer picture of the promise of much of this new networked technology is coming into view now.