# 18:07 in ./books
The law is the expression of the general will.
-- Rousseau, via the Declaration of the Rights of Man and of the Citizen 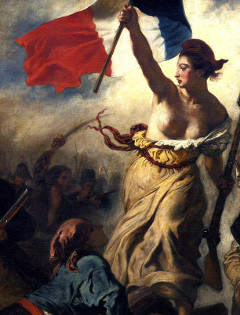 I'd already finished reading Hilary Mantel's Place of Greater Safety before discovering it was the first book she wrote (but not the first published). In the interview that accompanies the e-book, she says it took her five years to write: the tremendous amount of research and detail would attest to this.

Although it has quite a slow start, and a fair number of characters and places to follow, the pace quickened as the "revolutions" happened. As the book neared its climax, I was sad it was ending.

A few years ago, I discovered how great a well researched and written historical novel could be when I read First Man in Rome by Colleen McCullough. This book was not only a pleasure to read, it taught me more about life, death and customs of ancient Rome than any school class or textbook. Like McCullough's book, Mantel's close research immerses you in the events. The story is of three friends experiencing the upheaval of the French Revolution: no ordinary people these however, but Robespierre, Danton and Camille Desmoulins. These three are at the heart of the book as they sat at the heart of the revolutionary drama.

I was unfamiliar with Desmoulins and he is perhaps the main character in the book. Complex, funny and good looking but also a hateful figure, his journalism and speech writing play a large part in stirring things up. A radical: but someone more radical always comes along. A childhood friend of Robespierre, their dynamic creates a massive central tension resolved through destruction.

Although not quite as polished as her latest books, the writing is concise and sharp. It can be hard reading a book where many, if not most, of the main characters are not only unlikeable but quite nasty as events roll forward. However, this can be seen as the mark of a great writer. It is also chilling to enter a world where justification for mass murder, industrial extermination and casual brutality is so easily expounded. Each of the main characters arrives at such a place, some trying to extricate themselves from the consequences at the end. Like them or not, you do care about what happens to them in the end, even though the tragedy's end is clear.

Revolutions then and since have had woeful consequences and you can trace some of the calamitous ideologies of the present back to these times. The triumph of reason can lead to horror and reasonable men lead us all to hell.

The In Our Time program on BBC Radio 4 had a good broadcast on the French Revolutionary Reign of Terror in 2005. Download an MP3 here.