I pencilled this into my calendar ages ago but only got around to visiting last Thursday. I'm very glad I did. I was tempted to queue for the new exhibition Life and Death: Pompeii and Herculaneum before the crowds get overwhelming, but in the end didn't feel like it and went to Room 90 instead.

The smaller and quieter exhibition in Room 90 is In Search of Classical Greece. 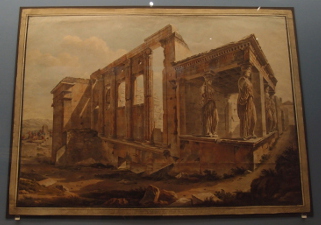 In Search of Classical Greece displays the drawings and paintings of Edward Dodwell and Simone Pomardi from their trip through Greece at the start of the 19th Century.

On the left, Western End of the Erechtheion, Dodwell 1805.

Their trip took place well before the Greek War of Independence from Turkey (between 1821 and 1832) and shows a Greece that has now changed almost beyond recognition. From the Britsh Museum's web page :

70 views exploring the beauty of the Greek landscape and picturesque ruins of Classical civilisation have been selected from an archive of over 1,000 images. Many of them are highly finished in watercolour and have never been on display before. They record buildings that have disappeared or changed and landscapes that are now unrecognisable under modern cities.

Some beautifully detailed paintings in the display, shown with other artifacts (such as some ceramics, final bound volumes) alongside interesting descriptions and history. In some way you can thank Napoleon for this, since the closure of the usual Grand Tour routes in Italy forced people like Dodwell to look elsewhere. Greece proved a very stimulating substitute and the rest of the century can really be described as "sensational" when one considers the finds at Troy, Mycenae and Crete. It's hard getting too much of this stuff sometimes.

Now for the Pompeii show ... once I find a decent spare slot ...