I have a lot of sympathy for ordinary Greeks just now, trying to get by when things are looking so bad. But for the Grace of God and all that. I've been to Greece a long time ago, and hopped around a few islands, as you do. And back then, it was clear that Greece was a lot less developed. This was clear in Athens and would have been clearer still in the countryside.

This is a quote from Economist Meg (Megan Greene) :

My friend explained that the owner of the bookstore/café couldn’t get a license to provide coffee. She had tried to just buy a coffee machine and give the coffee away for free, thinking that lingering patrons would boost book sales. However, giving away coffee was illegal as well. Instead, the owner had to strike a deal with a bar across the street, whereby they make the coffee and the waitress spends all day shuttling between the bar and the bookstore/café. My friend also explained to me that books could not be purchased at the bookstore, as it was after 18h and it is illegal to sell books in Greece beyond that hour. I was in a bookstore/café that could neither sell books nor make coffee.

We have all heard a great deal about all the various reasons that Greece is in such dire straits. We know that there was a desire from the EU leadership to look the other way in the interest of the project. We know about the massive imbalances created between the very different economies within the Eurozone. We know about the huge amount of fraud and corruption endemic in the country. The list could go on, and will no doubt be added to over the next few years as things play out. 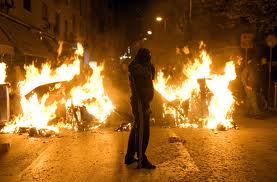 An article I recently read about this crisis took a slightly different route in explaining the background to the problem, and why Greece has ended up the way it is. The thrust of the argument is historical and tries to illuminate the nature of Greece as a people and a state. Greece has had a very turbulent history, even leaving aside the bad 20th Century, with tyranny and despotism in the Military Junta, and war and terror with the Nazi occupation. The country's been the hub of the Roman Empire and Byzantium, then extinguished and overrun by the Ottoman Turks, leading to hundreds of years of subjugation.

From Greece: The history behind the collapse by Georges Prévélaki :

Despite the existence of a highly westernized cosmopolitan elite, the population of Greece is culturally, for the most part, eastern. Aside from occasional nationalist twitches, the average Greek is more at home with a Turk, a Lebanese or a Sephardic Jew than with an Englishman or a German.

This sort of history changes people, and changes peoples' concept of nationhood. Furthermore, the way that the state has grown and functioned is quite different to the way the Western (Westphalian model) states grew up :

The building of the modern state was carried out, with difficulty, throughout the nineteenth and twentieth centuries, with advances and retreats. In order to win the allegiance of the rural population, who were resorting to banditry in response to imported political modernity, the central power used the mechanisms of state, not only as an instrument of repression, but also as a system with which to distribute a kind of income or tribute. The principal currency was recruitment by the state. Initially, a post in government service was the reward for submission pure and simple; later the prize was suffrage.

And this is the way it has worked for a long time, and one of the main reasons that the EU and the Eurozone membership has been such a disaster.

The article does offer a glimmer of hope: that the Greek people inhabit a larger world than the Greek "territory" itself, with many very able and astute people working overseas. Greece has a large pool of talent throughout the world. If it can rebalance itself at home, maybe it can attract these people back to rebuild. Right now, it is difficult to see much hope in the situation, one has uneasy feelings that things will get a lot worse before they get better.

This was an excellent and thought provoking article for those interested in a historical and social background.