Archives
Recent Posts
I am Gnome 2

When I started running Linux, I used a "window manager" not a "desktop". A window manager like FVWM, which was fairly basic but perfectly functional for starting applications like a terminal and a web browser (all you really need).

When Gnome came along, I started using it almost immediately and have used it ever since. It's changed a lot over the years, maturing into a much cleaner and professional desktop environment. The transition from version 1 to 2 was a little rocky but this proved to be only growing pains, as the desktop stripped out over-complexity and simplified itself. It became more useable. 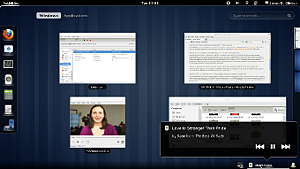 The Gnome3 desktop was released last week but I won't be using it, at least not for a while. Given my recent switch to Debian on the desktop, and a few (still unresolved) hiccups, I'd rather not have the extra "excitement" for now.

Version 3 has had a very mixed reaction from people - it's a major redesign of the desktop. I tried it a month or so ago via a Fedora based live CDROM and loved the look. But playing with it for an afternoon doesn't give me a good idea of how well it works in real life. It looks great but I have some trepidation about the useability.

So, for now I'll stick with Squeeze's Gnome 2. It works well and I can find my way around it quickly. But I'll keep a close eye on the Gnome 3 evolution because I hope and expect to be using it in the near future. Congratulations to all involved with the release!