I've been using Linux a long time (1994/95) and the Debian Linux distribution's been around for longer (1993). But back then, Debian could be painful to install and these were the days that installs were floppy disk based and modem's were slow. That was if you were on the internet at all. I managed to hop on the information "superhighway" in 1995 or so, at a blazing 9600 baud. One thing I do not miss is trying to configure PPP options and chatscripts!

So, I was a happy user of Slackware for 2 or 3 years, the days of compiling pretty much everything bar X from source (this was a 486 and 64MB RAM, so things took time ...). Then working through the original Redhat (3 or 4), up to version 8, switching to Fedora Core 1, then 2 and then ... bailing on that and jumping to Ubuntu for the hedgehog, where I've been ever since. In all that time, I tried a few other dists as well. However, Ubuntu got it right for me, at the right time and things just worked much better out of the box.

My Mum uses Ubuntu for heaven's sake. What a change.

I am already running Debian Lenny (old stable)) on various servers but took the plunge at the weekend on my laptop by installing (feeling brave) Debian Testing (codename: Wheezy). It's not diverged too much from Squeeze (stable) yet, so I thought I'd give it a go. The laptop is the most complicated "desktop" I have, given wifi, 3G dongles, suspend etc. So far, it is working wonderfully - even the 3G dongle ("3" via Network Manager). 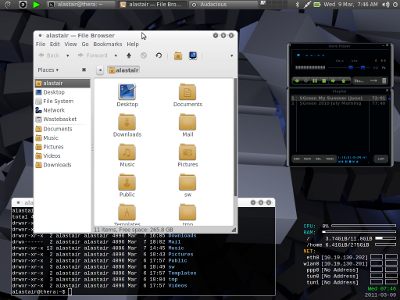 The laptop is a Thinkpad X60s

Hopefully, I'll manage to stick with it and switch away from Ubuntu on the desktop. I'll detail my reasons why in the next post or so.