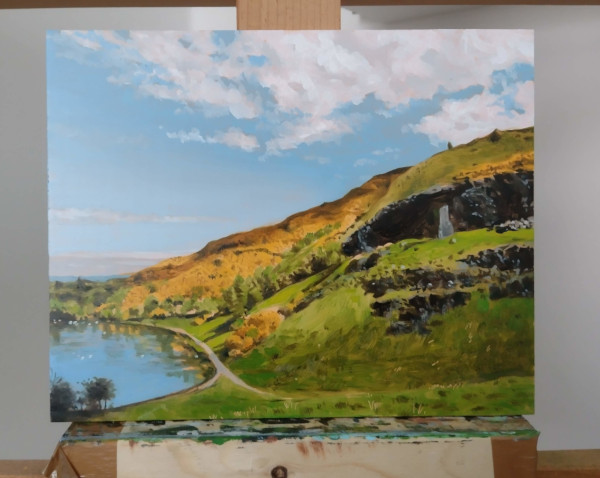 Another small painting with a bit of orange in it. I'm worrying a little that the painting is a bit too "nice" now. Too colourful, too bright? Maybe one for the tourists. Or maybe just paint a really big version and go all in on the sweetness? I have another two similar paintings I should also dig up.

Edinburgh is blessed with many beautiful views, a few can be found close to its own extinct volcano, Arthur's Seat. The picture above shows the view Eastwards over St Margaret's Loch near Holyrood, with the ruins of St Anthony's Chapel on the brow of the hill on the right.

Although Arthur's Seat does not compare to the mountains of the Highlands, let alone the Alps, it is a very impressive and monumental place in Edinburgh. It has a grand scale when you walk around it's base or climb to it's summit. Make sure you dress properly though - especially decent walking or climbing boots.


A Cold and Frosty Morn 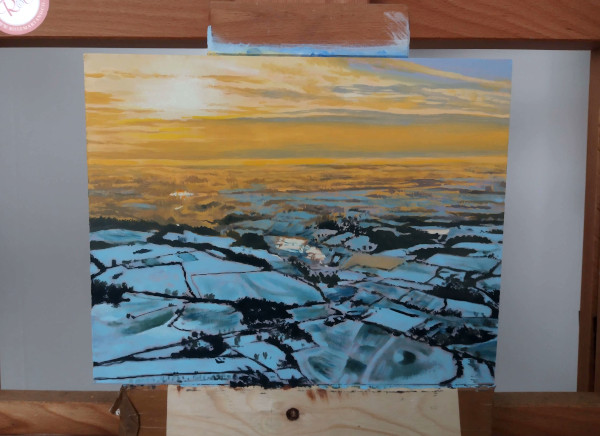 The new year has got off to a quiet start, as they often do. The pestilence is still hanging around unfortunately but this wave seems to be less pestilential than previous ones. Apparently, this version is much milder if caught, perhaps as bad as a case of the hiccups. Better safe than sorry though: no one wants to risk long hiccups.

I did the small painting shown above using a TV screenshot as a reference (a BBC nature program I think). That was the first of the year and I'm also getting to the end of my next one, hopefully completing it without disaster. I was looking at some of my old pieces I've stuck up on this blog, and see a few clunkers. Maybe I'll look back on this one and think the same? Anyway, here's to a year of few clunkers.