Archives
Recent Posts
A Gash in the Sky

My second "study" was done from a reference photograph I took one evening at sunset, standing near the top of the Mound and looking out across the city. The sky was full of dark blue clouds but the setting sun made a bright yellow/orange gash stretched across the horizon. Quite a view.

This was the second of the quick paintings I attempted to do last year. If you want to do something like this in 2-3 hours, you have to compromise. Be bolder and much less fussy or concerned with detail or embellishment. Being a generally tight and fussy painter ... this is a challenge. 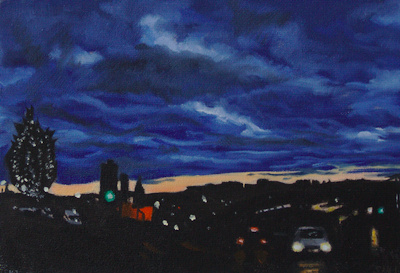 I thought the result was promising enough to do a larger version earlier this year. I'm pleased enough, it was the largest painting I'd done up to this point and I even have a frame for it. 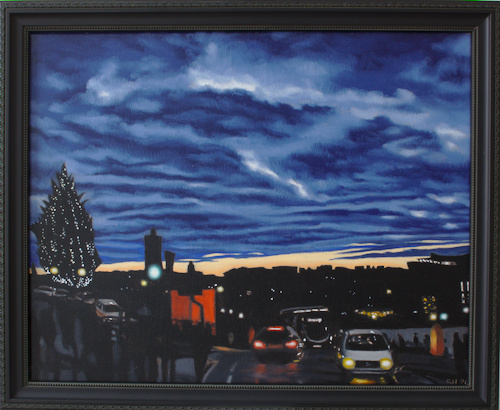 The "Mound" in Edinburgh is, literally, a big pile of dirt: an artificial hill that connects the Old Town to the New Town. It was formed from the excavated dirt, rock and rubble dug up when the New Town and Princes Street Gardens were created in the 18th and early 19th Centuries. It's quite scenic now, with the Scottish National Gallery and Royal Scottish Academy at the bottom, and the old Bank of Scotland building near the top. Standing close to this at the top of the hill, you can look down and across the New Town, and over the Firth of Forth all the way to Fife.

When Google's AlphaGo AI triumph was news in 2016, I was impressed but not very informed about the board game Go, or the real achievement. AI (and "machine learning") was starting to make a lot more news though, and people started to take notice.

DeepMind's artificial intelligence system AlphaGo beat the Korean Go master Lee Seedol 4-1. Go is an extremely popular board game, especially in China, Japan and Korea, and it is considered a much harder game for a computer to play than chess. DeepMind was a British AI company that Google bought in 2014. Few people thought a computer could beat a good human Go player, at least not for a decade.

Watching the documentary film AlphaGo - The Movie on YouTube opened my eyes to the scale of thing. The Korean interest in the AI challenger match was intense: the sort of press scrum you get on the Hollywood red carpet for big film stars. Also quite astonishing how much the Korean Go experts discounted the possibility of losing (any game). I found this film quite riveting. Great to see inside a cutting edge technological start-up as well.

You can watch AlphaGo - The Movie on YouTube. You don't need to understand the game.


No Sunshine on Leith

This was completed yesterday, started the day before : 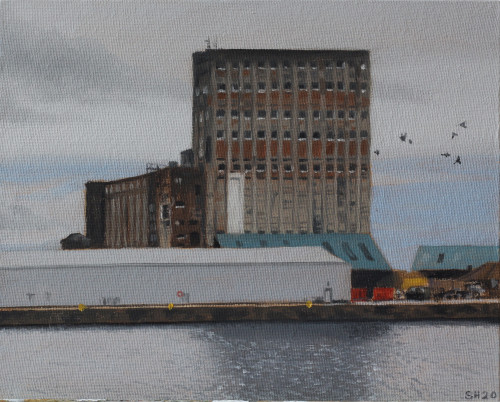 Named from the great Proclaimers song, Sunshine on Leith of course. This shows a big warehouse in Leith, from a photograph I took after a bike run down and around various bike/walk paths starting at Warriston. A cloudly, overcast day.

This took two afternoons because I ended up wiping off the main warehouse after messing it up. I knew I'd have some trouble painting the big building: all the windows and complicated front decoration! This sort of fine, straight-edged detail often causes me headaches when painting wet in wet using oils At least the case when I'm not wanting to use layers, let things dry, take extra care over time.

And a last point. Yet again, a huge amount of trouble getting a decent photograph. Something that looks like the actual painting. I have a Canon EOS 700D, not a bad camera at all, shooting in RAW format. I know how to set ISO, shutter speed and aperture. I use a tripod. I've taken the RAW into a RAW editor to play with (Darktable), used a photo editor (Gimp) to try adjusting and have had a lot of trouble with the results. In some cases, I think it might be glare, perhaps exacerbated with the canvas texture showing up in the light/glare. I still need to figure out a good way to do this. It's very important to get this as good as possible. I'll get there .. still diggin'

# 19:03 in ./general
This comes via The Scottish Gallery. Victoria Crowe in her studio talks about the "self isolation" she's doing :

Like her, I see an artist's life can already be quite isolated in the studio, on your own. It's harder for many people. I loved Crowe's show at the City Art Centre last year. I'd love to see her actually painting because I was intrigued by some of her techniques.

These are two small oil paintings done recently on canvas boards. Both 8x10" and completed in an afternoon. This is a photograph using my mobile phone camera :

All the rest of the photographs are from my Canon EOS 700D but using the built-in JPEG (not RAW), then slight "auto" white-balance in an image editor, then a scale and re-export ... and I'm usually unhappy with the way my paintings come across on the computer! I need to fix a workflow that makes them look more correct. 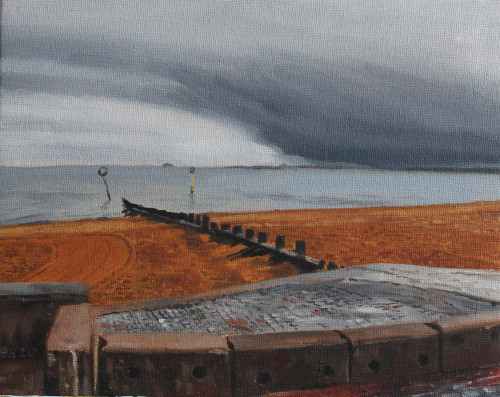 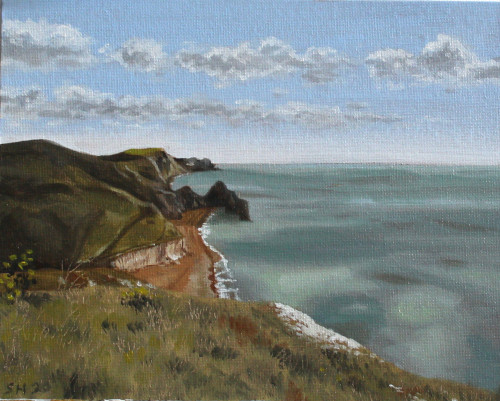 I've been watching quite a lot of the artist Tom Hughes on YouTube via his channel Thoughts on Painting. He is a Bristol based plein-air oil painter and it's been interesting watching him work, and travelling around the country. No fuss or magic, but down to earth and personable. It's made me start considering trying outdoors painting myself and buying a similar "pochade" box. The painting above was done from a screenshot taken off a video he shot in Cornwall: after finishing a painting, he panned his camera around and I thought it looked worth a go myself! I like his work: it also reminds me of work by another painter who is out and about all the time, Peter Brown. Brown's painting of George Street, Bath, in the rain was worth a big mention in a post I made in 2017.

Talking about small scale art, the Open Eye Gallery in Edinburgh has an annual show in December called "On a Small Scale". It is an exhibition of small postcard sized (15-21cm) works of art by well known and invited artists. There are four walls filled with all these works, perhaps a couple of hundred in total (I didn't count). All media and all small. This type of exhibition is my favourite because of the huge variety on the walls: there's always something good, sometimes great. Another reason to look forward to December. 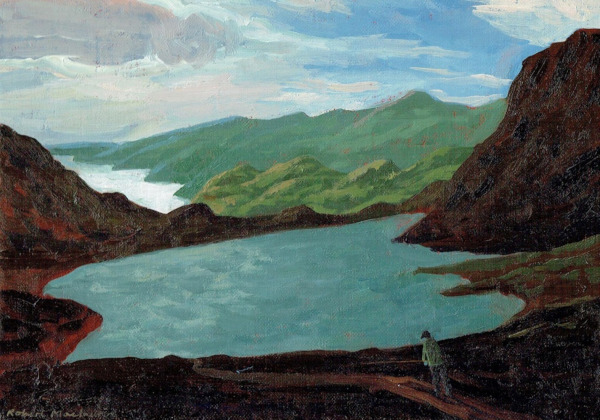 Path to the Loch, Argyll, by Robert Maclaurin, oil on linen on board, 15x21cm 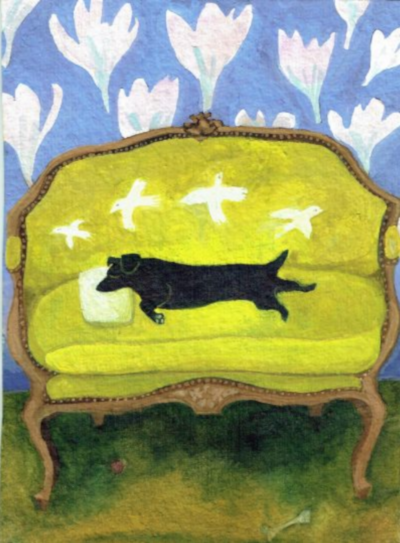 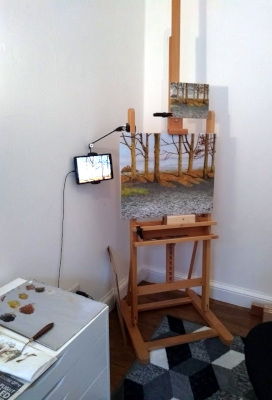 Now I'm in Edinburgh, I have a bit more room to devote to painting in my "studio" (bedroom number two - no actual bed). This makes a big difference.

Late last year I decided to try and do more painting, and seriously sit down much more. I seem to have a lot of trouble starting anything, sitting down and actually getting going. Plenty of procrastination. I think this is a trait shared by many people. I pushed a bit harder and started a small (8x10"), quick (2-3 hours), afternoon oil painting. This turned out well so I tried to keep this up. I bought a lot of small canvas boards and thought "who cares?" if I mess up, or rip them in half afterwards! I didn't quite keep the pace of one a day up, and doing quick (what I called) "studies" requires quite a bit of adjustment. However, I managed to do quite a few small paintings over a few weeks into December 2019, until Christmas got in the way.

In the meantime, last week I biked down to Portobello beach early, my first time down there. Lovely place that should be beautiful in the summer (but busy I bet). Of course, it rained: a heavy shower passed over quickly but, luckily, I was sheltered. I had a few photographs and painted this the day after, showing the rain clouds moving off towards North Berwick. Quite a striking view and I'm pleased with the end result : 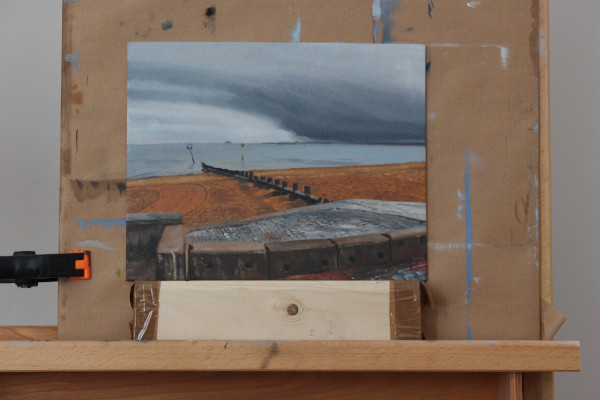 
On the Brighter Side 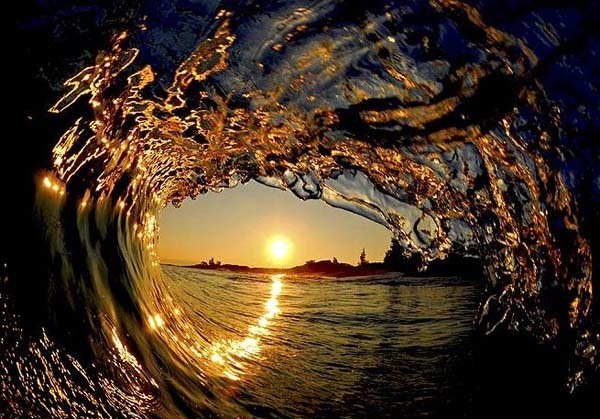 Oh, and maybe there'll be a baby boom.

And within a breath, the world was changed ...

It looks like we're in for a difficult and trying time for the next few months. If the disease doesn't get us, maybe the cure will. The BBC, doing their bit, have ramped up the coverage, extending their (5) PM radio news program to start at 4:30 pm, more news to add to our misery keep us informed. I'm listening to much less of that and more Radio 3.

I used to be a bit of a news junkie, reading the papers and taking in the news all the time. However, given the explosion in news media over the past few years, even from as far back as the start of the 24 hour news cycle with CNN 30 years ago, I've reduced my consumption a lot. Especially over the past few years, I've shrunk what I read, hear or watch a huge amount. This was for the sake of my own mental health: the news media seemed to cause a constant anxiety, worry and agitation, let alone political polarisation. I think this could well be a major causal factor in the decline of many people's health over the past decade. That and advertising perhaps. The internet, for all it's wonderful utility, has made it much worse.

With this new pandemic hitting, things are much worse. I'm trying very hard to not take in too much horror or hysteria. I don't even watch television but I know it will be winding up the panic day in and day out. No wonder we all get so sick, tired and angry.

Stay informed but it might be a good idea to switch off the firehose of negativity. 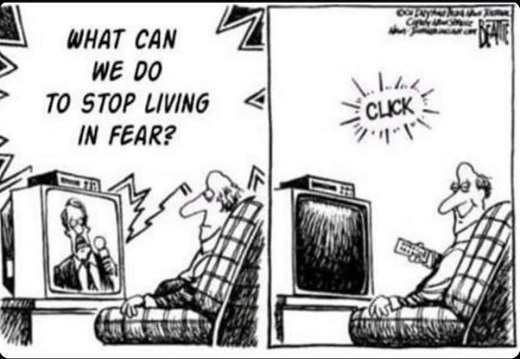 The above cartoon is by (I think) an American political cartoonist called Bruce Beattie. I took the image from the blog Maggies Farm.