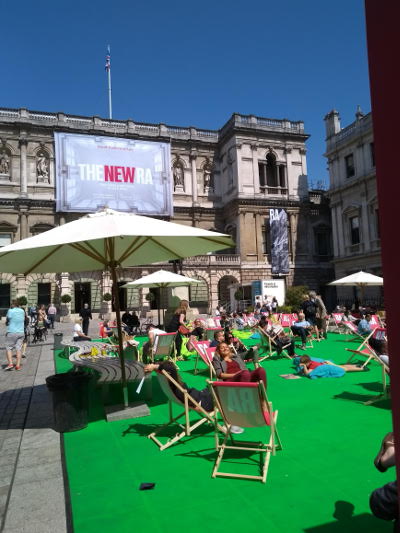 Good weather for a visit on Sunday to see the new Royal Academy, now the building work is almost complete and it's open to the world. This celebrates the 250th anniversary of its founding.

And what would Sir Joshua Reynolds, first President of the RA, think today? Especially when confronted with the display they have of some of the current student art work, let alone the dress code nowadays. Probably dumbfounded!

As part of the new displays, we are confonted with something quite horrific in many ways: a cast of a "real" crucifixion (made to "settle an artistic debate"). From the label :

Sculptor Thomas Banks RA and painters Benjamin West RA and Richard Cosway RA believed that most artists' depictions did not accurately demonstrate the effects of crucifixion. To prove their point, they obtained a corpse fresh from the gallows and nailed it to a cross while it was still warm. Once rigot mortis set in, a surgoen removed the skin and Banks made his plaster cast from the flayed body.

The RA has a web page about it. Quite amazing what you coud get away with back then. Below is a detail from a photograph I took. If you want to see all of it, see the web page. Not for the squeamish. 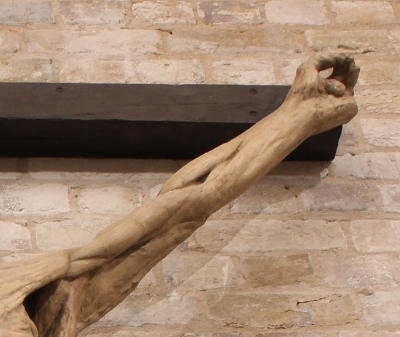 A less unsettling display is a copy of Leonardo's The Last Supper. A large oil painting, it is thought to be a copy by pupils of the master, painted about 1520. The original is extremely degraded now but this copy shows many details lost over time. The RA web page has the history.