A couple of weeks ago I went to see the new Royal Academy exhibition Charles I: King and Collector. Last week I went to the closely related exhibition Charles II: Art and Power at the Queen's Gallery. Both are showing stunning works but the RA pips the award for the greatest display, even though it's almost twice the cost.

The Royal Academy has some very large rooms and they are needed here, for some of the work is monumental. In particular, there are the nine huge Mantegna canvases of the Triumph of Caesar (c.1484-92), bought from the Gonzaga's of Mantua when they hit some financial difficulty at the start of the 17th Century. Charles' man Nicolas Lanier added these to the collection for his master. 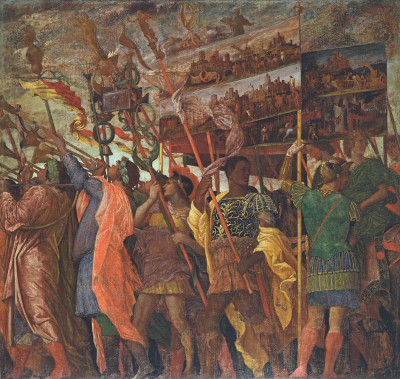 Right: Triumph of Caesar: The Trumpeters by Andrea Mantegna, c.1484-92

See : The life of Charles I: King, collector, tastemaker, traitor by Jenny Uglow.

Who can argue with such greats as Holbein, Van Dyck, Rubens, Rembrandt, Titian and Veronese? To name but a few ...

Coincidentally, a BBC TV show was on recently about the setup of the RA exhibition, available via the BBC iPlayer : here. It is always fascinating to see how much work goes into this type of show. Great royal propaganda recently