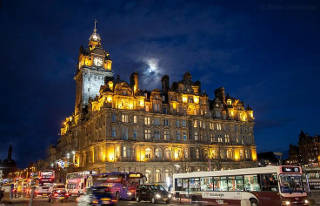 Above: What was the North British Hotel, Edinburgh.

In Edinburgh a few months ago, I referred to the big hotel at the east end of Princes Street as the North British. I was corrected: it's The Balmoral now (well, I've been away a while).

Balmoral is a Gaelic word meaning "majestic dwelling", and I think that would certainly apply to this impressive hotel. Of course, the name "Balmoral" has royal connotations today as well. Gaelic itself is appearing on all sorts of signs in Scotland now, even though most Scots have no idea how to pronounce much of it. However, the original language of North Britain (this is all well before the country "Scotland") was not Gaelic but Brittonic (or Brythonic) a "celtic" language shared with the inhabitants of the rest of the island of Britain; a language that would become Old Welsh. 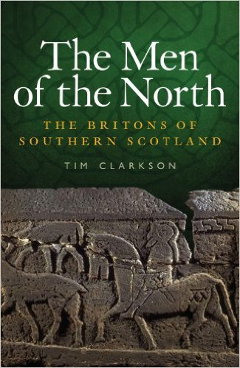 I recently read Tim Clarkson's book Men of the North. Clarkson tries to shed as much light as possible on the various North British Kingdoms that sprang up after the Roman's retreat from the island. This is a very hard period of time to unravel but he does a good job with the extremely unreliable and fragmentary evidence available.

Most of this evidence is much later than the time it purports to describe. It can also be as much about the time it was written as the time it covers. Thank goodness for Bede, a Northumbrian who wrote the best and closest account we have of this early period. 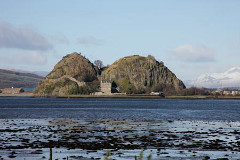 One of the longest surviving British Kingdoms in the north was Alt Clut, based at the mouth of the Clyde and Dumbarton Rock. It was only in 870 that the rock was abandoned when it was attacked and sacked by the Vikings. The center of power was moved to Govan. In the 11th Century, the Kingdom of Strathclyde was absorbed by the growing power of the Scots :

Around 1050, the kingdom of Strathclyde was conquered by the increasingly powerful Scots. King David I founded a new diocese in Glasgow in 1114, and the old church at Govan was gradually abandoned. As for the Britons themselves: "They were no longer Cumbri but had become 'Scots' like their new political masters. Inevitably, as time wore on, the deeds of their forefathers began to fade from memory. Soon only the sculptured stones remained, a handful of monuments scattered across the land, to bear mute witness to a forgotten people." (Tim Clarkson)

The above quote is from The Govan Stones, a blog post from Jo Woolf describing a visit to Govan Old Parish Church. The church contains a surprising number of very ancient standing stones and sculptures from this early period. Tim Clarkson linked to this from his own website devoted to the Britons of Strathclyde, Early Medieval Govan. 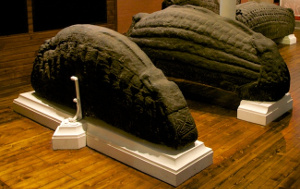 Above: the enigmatic "hogback" stones.

Who would have thought things like these were hidden away here? Some of the oddest artifacts are the "hogback" stones - are they norse? No one really knows what they were made for, or what they represent. But as Jo Woolf says :

Built to withstand the wrath of giants, they look as if their whole purpose is to keep something in! You get a sense of someone being locked within the earth, safe from all kinds of unspeakable evil.

A good reason to visit Govan; something I never thought I'd want to do.