A good visit to the new British Museum exhibition Defining Beauty, a look at how the Ancient Greeks represented and viewed the human body. Mostly beauty here but there are some contrasting views of the uglier, whether the satyr, centaur or Socrates himself.

Socrates was famously quite ugly, although very appreciative of the beautiful young male athletes he watched in the gymnasium. Hmm. Ahem, anyway, the inimitable Brian Sewell talks about this side of the show. 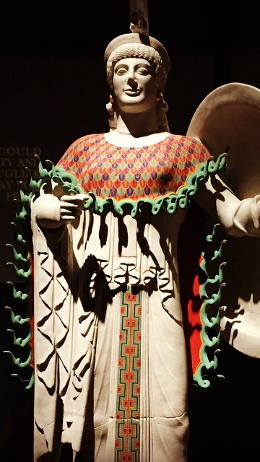 It was quite a revelation a few years ago when it became apparent that the pure white marble we're familiar with was anything but pure and white when first erected.

Researchers have come to the conclusion (since backed up conclusively) that the Ancient Greeks painted their sculptures and statues in bright colours, perhaps to a garish degree to the modern eye. This was on display in the second room of the show and was startling to see for a change. Very different.

Below: Trojan archer from the Temple of Aphaia on Aegina, Greek, c. 490-480 B.C. As it exists now on the left and on the right, as it would have looked (and as displayed in Defining Beauty).

Leaving aside the colours, most displays were the normal grey and white stone (with some bronze) but there is some amazing work here. 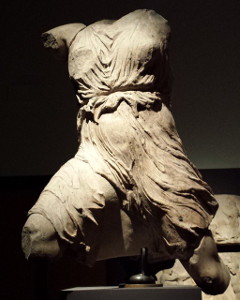 This includes the very beautifully carved drapery on Iris, from the west pediment of the Parthenon.

Iris was a messenger god and was placed to accompany Poseidon. With her wings now missing, she was carved as if just coming in to land on the building.

Click the picture for a slightly larger version (then use the back button to return to this page). 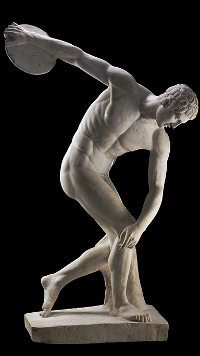 Also on show, the large discus-thrower (discobolus). This is a Roman copy from the 2nd century AD of a bronze original of the 5th century BC. Statue from Hadrian’s Villa in Tivoli, Italy.

Quite a few on display are actually Roman copies of lost Greek originals. Luckily, the Romans made excellent copies and were great students of the Greek style. This is an amazingly life-like and well made piece.

Perhaps the last thing to mention is the exhibition display. On show in the Sainsbury Exhibitions Gallery, a new space to me I think, the rooms are large and tall, and the lighting dramatic in the dark space. This made a very welcome change from the standard display rooms, brightly lit and against similar grey and white stone and marble floor and walls. The British Museum is lucky to have these works in its permanent collection. 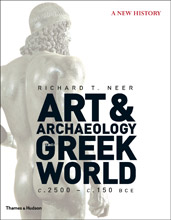 I bought a great book a few years ago that is a very good accompaniment to this exhibition, Art and Archaeology of the Greek World by Richard T. Neer. It's both well written and well illustrated.

The publisher Thames and Hudson have a page on it where you can click the book cover for a look inside. A beautiful large format hardcover like this is beyond the capabilities of an e-book. 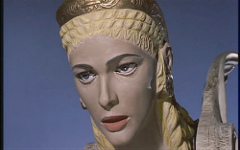 If anyone remembers the 1963 film Jason and the Argonauts, you might also recognise an echo of the garishly painted statues in the painted masthead of Athena on the prow of the ship, the Argo. Great film! I loved it when I was little, especially the Harryhausen sequences,

The British Museum have a good blog post on the exhibition's design. Worth a look.