Six major estates own large parts of central London (see map). They have done so for centuries; the Grosvenor family first acquired land in Mayfair and Belgravia in 1677. Until the 1990s most of these estates were run in a broadly similar manner. 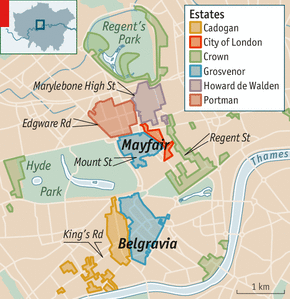 Regent Street is owned by the The Crown Estate, a "property portfolio" that traces its origins to the The Norman Conquest.

Over the course of the centuries, large estates have tended to be broken up to some extent, especially those that relied on farming, or some other industry in decline. But if you were lucky enough to have seized, been gifted or purchased land in an up and coming urban centre like the west end of London, you have been very lucky indeed.