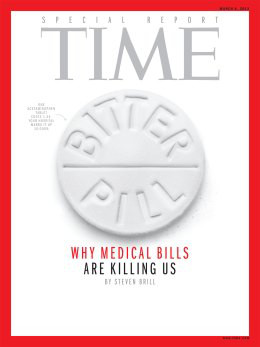 I might have bought Time magazine once in my life (maybe). It always struck me as a magazine with too many adverts and too little content, even if some of it was good. However, an article on their web site investigating the US health care system is extremely good, perhaps of the prize winning category.

The article is called Bitter Pill: Why Medical Bills Are Killing Us and is written by Steven Brill. It is well worth a read.

There are very hard, very troubling issues raised by Mr Brill about the US Health Care system. This has been in the news a lot of course, not only because Obama's health care bill goes into effect next year but because the economics and costs have been seen in stark relief due to the large financial problems facing the country. As Brill says about the "$5.36 billion" spent since 1998 :

And before people jump on the idea that this is just "Big Pharma", it's not. This is "pharmaceutical and health-care-product industries, combined with organizations representing doctors, hospitals, nursing homes, health services and HMOs".

These supposed non-profits are run as very large and extremely profitable businesses.

There's a great deal wrong with our own NHS in the UK, as recent troubles have shown (many more where that comes from) but the fundamental structure is right I think. The NHS is a very large organisation and with size comes negotiating power to keep costs down. Everyone is covered. However, in the USA :

According to one of a series of exhaustive studies done by the McKinsey & Co. consulting firm, we spend more on health care than the next 10 biggest spenders combined: Japan, Germany, France, China, the U.K., Italy, Canada, Brazil, Spain and Australia. We may be shocked at the $60 billion price tag for cleaning up after Hurricane Sandy. We spent almost that much last week on health care. We spend more every year on artificial knees and hips than what Hollywood collects at the box office. We spend two or three times that much on durable medical devices like canes and wheelchairs, in part because a heavily lobbied Congress forces Medicare to pay 25% to 75% more for this equipment than it would cost at Walmart.

And this is fundamentally the problem built in to the system. Using some real life people as examples, Brill goes through the medical bill they receive and shows how inflated the costs are - if you are not on medicare or medicaid. Even the insured have to pay massively greater costs. Something that would cost 11¢ from Amazon costs $18 from a hospital (Accu-chek diabetes test strips).

America has to fix this, and from what I understand, "Obamacare" won't do it: I'm glad we have something like the NHS here. If I ever want to travel to the USA in the future, I'll have to be very careful when sorting out health insurance and take good advice. I don't have any health problems just now, but who knows? Chest pains that turn out to be indigestion can lead to a bill for $21,000.