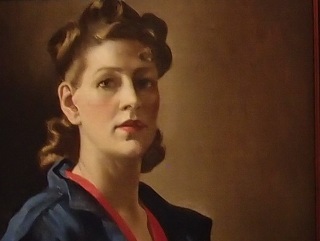 I've never been to the National Portrait Gallery and it was starting to rankle a bit. It's right beside the main National Gallery and also free, so there's no excuse ...

I was only there a couple of hours, but one of the most striking paintings I saw is shown on the right.

It's a self-portrait by Anna Katrina Zinkeisen who, despite the name, turns out to be a British artist. You can see the full painting on the gallery site Oddly, what it made me think of was the famous We Can Do It! WW2 poster. My photograph does not do it justice.

According to wikipedia, Anna and her sister Doris painted murals on the RMS Queen Mary, a ship now docked in Long Beach, California. Doris Zinkeisen was also a very talented artist. I love coming across great works of art by artists I had no inkling existed. So far, there are a great many of them! Again, according to Wikipedia, they were Scottish born but with a father who could trace his ancestry back 200 years earlier in Bohemia (which might mean we have some fall-out of the Thirty Years War to thank for their residence here).

The BBC have a slideshow of some other paintings by Anna Zinkeisen.

Another painting I liked was a Mervyn Peake self-portrait. As the writer of the Gormenghast series, he looks suitably ... odd.

Happy Year of the Dragon!

I had to negotiate very busy streets around Soho and Shaftesbury Avenue, with a lot of streets closed to traffic and a lot of people out. It's Chinese New Year and the celebrations are always a family time on the last Sunday of January. Very busy this year!

I'm not as smart as I thought I was

A great comment on Reddit a few weeks ago, leading to a good discussion in the comment thread below it. The comment was from an MIT graduate and describes how badly his college education started to go until he learned how to ask for help. The comment is titled I'm not as smart as I thought I was and makes salutary, but inspiring, reading :

People fail to graduate from MIT because they come in, encounter problems that are harder than anything they've had to do before, and not knowing how to look for help or how to go about wrestling those problems, burn out. The students that are successful look at that challenge, wrestle with feelings of inadequacy and stupidity, and begin to take steps hiking that mountain, knowing that bruised pride is a small price to pay for getting to see the view from the top. They ask for help, they acknowledge their inadequacies. They don't blame their lack of intelligence, they blame their lack of motivation.

The moral of the story is that it's stupid not to ask for help if you get stuck, at any stage in life or education. Even, or maybe especially, at a place like MIT.


Can Greed Be OK?

Looking at the different outcomes for North versus South Korea and East versus West Germany :

There are few controlled experiments in economics, but these are as close as we get, and the results were clear. They were also unexpected. Hard though it is to believe today, in the 1960s many serious commentators on left and right believed that Russian economic progress threatened western hegemony. Those on the left were naively credulous and those on the right victims of paranoid fantasies.

A perhaps apocryphal story tells of a Russian visitor, impressed by the laden shelves in US supermarkets. He asked: “So who is in charge of the supply of bread to New York?” The market economy’s answer – that not only is no one in charge, but it is a criminal offence for anyone to seek that position – is surprising.

As for whether "greed" can sometimes be "OK" (from an amoral perspective), read the linked article above to find out.


Capitalism - What is It?

The word "capitalism" is thrown around a lot just now, primarily because it may or may not be on its last legs, depending on who you ask. If, indeed, we can call our economic system "capitalism" at all. So it's a good idea to try and make sure we understand what we mean when we talk about it. This is why I am always grateful to read a well considered and non-ideological summary of the system. Never the final say of course, but a brick in the wall of understanding.

I subscribe to John Kay's blog because he posts well reasonable discourses on things like this. His take on capitalism emphasises the shift that took place separating ownership from actual control. Ownership diffusing through shareholding and control moving to a professional managerial class and a corporate bureacracy :

So the business leaders of today are not capitalists in the sense in which Arkwright and Rockefeller were capitalists. Modern titans derive their authority and influence from their position in a hierarchy, not their ownership of capital. They have obtained these positions through their skills in organisational politics, in the traditional ways bishops and generals acquired positions in an ecclesiastical or military hierarchy.

Kay's article Let's talk about the market economy is concise and worth reading.

In a slightly different vein, he also recently wrote a review of a book called Good Stategy/Bad Strategy by Richard Rumelt. Business book sections have more than their fair share of rubbish it appears, but this book sounds better :

Declining market share or inadequate profitability is not the problem, but the symptom of the problem. But in business, as in the surgery, such diagnosis is frequently uncomfortable and embarrassing. And self-examination demands honesty which is particularly difficult to achieve in groups of competitive individuals. It is easier to announce aspirations, or to luxuriate in fluff. Then you seek “buy-in” to your bad strategy. That process saves thought and minimises disagreement.

Kay is a severe critic of the current financial system and most of his criticisms ring true to me. A lot of people are making similar arguments but Kay does so in a clearer and, dare I say it, saner way than many. This is a desire to fix the system not destroy it.

"Capitalism" working properly, fairly and for the common good.

Daniel Kahneman makes an appearance in The Black Swan by Nassim Taleb, a book I read last year and one of the best books I've ever read.

Kahneman is a nobel prize winning psychologist. His Nobel is in Economics, and it is ironic that amongst all the people Taleb has a go at, economists figure very large. We will not hold that against him however, as his main speciality is psychology, especially the way we think and how we deal with risk and decision.

As he says, people are "endlessly complicated" and the way we think, how easy it is to fool us or guide our thought is fascinating. Kahneman has a book out called Thinking, Fast and Slow which is on my (ever growing) list of things to read. In the meantime, a recent Google Talk he gave is a good taste of his area of research :

It is well worth an hour of your time (50 minutes of talk plus questions).

He is also found on Ted.


John Martin's "Apocalypse" at The Tate

Happy New Year to all.

Although it's a quiet day on the 1st January, I saw that the Tate was open so decided to pop down there for a couple of hours. Now that TFL have a live bus departure web page, getting a 20 minute bus ride is much more pleasant as well. I know when to walk to the bus stop and wait ...

One of the current exhibitions is John Martin: Apocalypse, featuring some very monumental paintings done in the early to mid 19th Century. His most famous is from a group of three (a triptych) and called The Great Day of his Wrath : 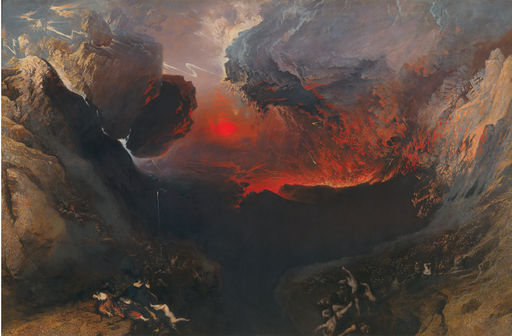 As I say, monumental, that is: large (3x2m) and detailed. Martin excelled at the extreme panorama, a generally fantastic landscape, often peopled by small, detailed human forms (or entire armies). They really are almost cinematic, widescreen films. In fact, some film makers acknowledge him as an inspiration (like DW Griffith or Cecil B. DeMille).

The Great Day of His Wrath shows the end of the world. It is one of three paintings shown together as a triptych, the others being The Last Judgment and The Plains of Heaven.

The Tate shows all three side by side and also puts on a show courtesy of Uninvited Guests. You can take a seat, the room darkens and then light and colour is projected onto the paintings, animated in part to bring out some of the horror (apocalypse) or tranquility (heaven) of the scene. Alongside some earthquake rumbling and audio effects, the show is very effective. It also includes some spoken parts, descriptions and reactions to the works, and a bit of biblical recitation. All good fun, and it let me get off a snap as shown below :

The paintings are very impressive and were very popular in their day (being toured internationally even). However, Martin went out of favour for a long time, being regarded by the "high brow" art establishment as too "popular" and garish. I can see some of the reasons why here, and to some degree, the paintings can look a bit like a paperback book cover, perhaps even pulp science-fiction or fantasy. But the reaction of the art establishment to a popular taste has always been negative it seems, even today.