I went to the RA a couple of weeks ago on a Sunday afternoon for the Degas and the Ballet: Picturing Movement show.

It costs money, and there was a queue, but knowing the sorts of queues for the National Gallery's Leonardo exhibition, one can't complain (it only took about 20 minutes to get in).

Inside, it really was very low lighting: dim, in fact. I was told that this was to protect the pieces, but I'm not sure if this referred to the photographic pieces or the paintings. I thought it a bit of a shame though. It was also quite busy (see: queue), which meant that seeing everything was a bit trying on occasion. It was worth it though. 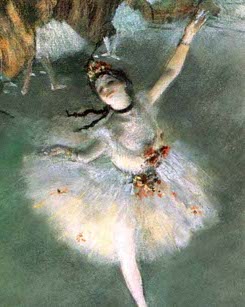 His style of painting is one of the attractions. He captures movement very well and his brush strokes often take on an almost pastel stick quality, something unique to him (he was also a master pastel artist). His sense of light and shade, especially from the large rehearsal room windows or stage lights, was also masterful.

The show was subtitled Picturing Movement and the theme was a comparison of the art of Degas and the new art form of photography. A lot of the exhibition was devoted to the display of historical artifacts related to both the still photograph and its successors. Not just the moving image but such things as the photo-sculpture, a form of photography that involved taking dozens of simultaneous pictures, with cameras arranged in a circle around the subject. I was very surprised to see this technique over a hundred years before The Matrix!

A good show. I just wish that they a) turned the lights up a bit and b) allowed (non-flash) photography inside.

As is often the case, Wikipedia has a good page on Degas.