I went to the Comica Independent Comics Fair on Saturday and had a good time checking out a lot of obscure and interesting stuff. It really took me back to the time I used to buy and read comics a lot of comics.

The fair took place in the Bishopsgate Institute, packing everyone into a large hall, with a stage at one end showing artists drawing live, projected on a big screen. 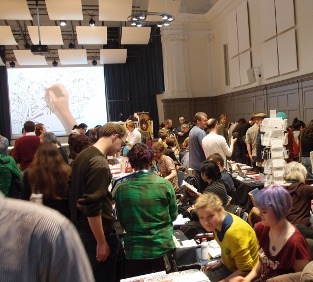 It was also busy (which was good to see) so you had to squeeze through the rows of tables carefully, trying not to get in the way of other people squeezing through. Many of the tables were shared between two or more individual artists, writers or publishers (often one person being all three). Every table was very different. It was a perfect opportunity to meet and chat to artists of all types.

There were a few professional publishers there, with professionally produced (and gorgeous) hard backed graphic novels, but most people were there as self-publisher, small scale and self-produced. 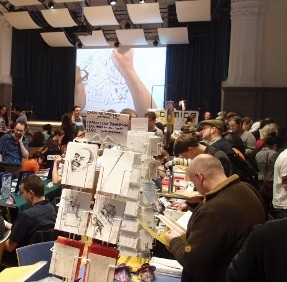 A big difference now from what I remember from years ago is that the quality of the printed material is much higher, and the cost and ease of production has dropped so much, that it almost seems like a golden age. A lot of the people I spoke with did a fair amount of their art on the computer using Adobe Photoshop. Mostly, this means they start the drawing in the usual (traditional) manner on paper, then scan and finish on the computer.

Much of the professionally printed and distributed material is of a very high standard now as well.It used to be that the French or Italian comic books were often of a much higher print quality (paper, binding etc.). This is no longer the case. It's astonishing to see how much care and attention is placed on some books produced here or the USA. 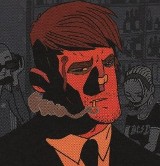 I bought a hard-back graphic novel by Uli Oesterle called Hector Umbra. It's a beautifully produced book published by Blank Slate Books, all in colour. For a few pictures from the book, see a blog by Alison Sampson called SPACE IN TEXT. 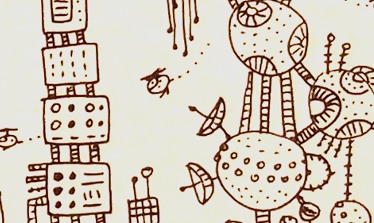 Part of the charm of a lot of self-published material is that people play and experiment with the media. Maybe things are not slick but they're fun (and still well printed). Sometimes, the packaging of the comic is almost as important as the content, things such as fold-outs, wrap-arounds etc. Comics, small and large, prints, screen-prints, posters, toys, badges and all sorts of things.

It was great that the artists themselves were there and happy to discuss the work they've done, how they actually produced it and what it means. A suprising number of girl artists as well and quite a few from overseas currently working in London (especially Japan and Korea).

All in all, an interesting afternoon out.

On a related note, Gosh Comics have a book signing this Friday, with Black Slate artists, including Uli Oesterle (creator of Hector Umbra). Details here. Gosh used to be opposite the British Museum but moved to Berwick Street a couple of months ago. I never thought much of it, but the new shop is excellent.