At the beginning of the classic David Lean film Lawrence of Arabia (IMDB), we are treated to an exhilarating ride around some English country back roads, shot in first-person on a fast motorcycle. It doesn't end well unfortunately.

On a visit to the Imperial War Museum in London a few weeks ago, I met the bike : 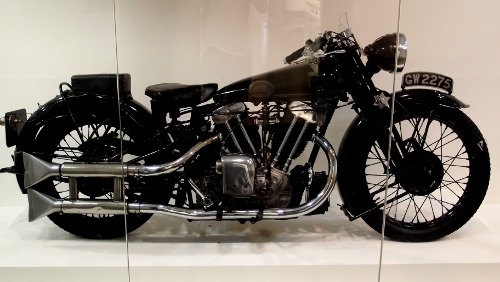 This 1000cc motorcycle was the prized possession of T E Lawrence, better known as 'Lawrence of Arabia', and the machine on which he was killed in May 1935. Lawrence's Brough Superior was tailor-made by George Brough himself and cost £170 in 1932. This was the seventh Brough that Lawrence had owned. He named each in succession 'George I' to 'George VII', and also referred to some of them, including this model, as 'Boanerges' (Son of Thunder').

The Brough Superior was the fastest and most expensive machine on the road at the time. It easily reached speeds of over 100mph and was at the cutting edge of 1930's design.

An uncommon bike for an uncommon man. T E Lawrence on wikipedia.