Fiennes, Nunn - The Tempest at The Haymarket

O, wonder!
How many goodly creatures are there here!
How beauteous mankind is! O brave new world,
That has such people in't! 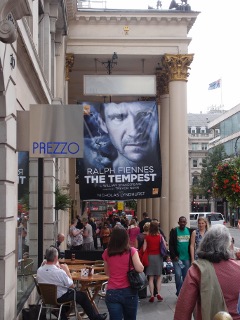 Having just finished reading Huxley's Brave New World, which gets its name from something Miranda (Prospero's daughter) says in the play, I decided that I had to take this opportunity to see The Tempest. My first time at Shakespeare in the theatre, a terrible admission to make.

The play stars Ralph Fiennes as Prospero and is directed by Trevor Nunn. It's been something to notice every time I cycle home from work, passing the Haymarket Theatre with its striking picture of Fiennes against a stormy background. He's an actor I rate highly. The rest of the cast was excellent as well, especially Miranda (Elisabeth Hopper), Nicholas Lyndhurst (Stephano), Clive Wood (Trinculo) and Ariel (Tom Byam Shaw). 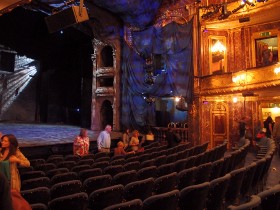 Like a lot of Shakespeare, the words tumble out quickly and it is often hard to hear and understand the gist of what's said. It takes time but one's understanding does improve and the author's genius comes through.

As Prospero says, he does rough magic on his island, and the production stages this well with a variety of stage (and even cinematic) tricks. My particular favourite being the angelic manifestation of Juno, with her nymphs Ceres and Iris, performing a heavenly song to bless the young lovers Miranda and Ferdinand. No roughness to this magic.

Yes, this show had some songs as well. Unexpected but beautifully done.