Visit to the British Museum for the exhibition Treasures of Heaven. 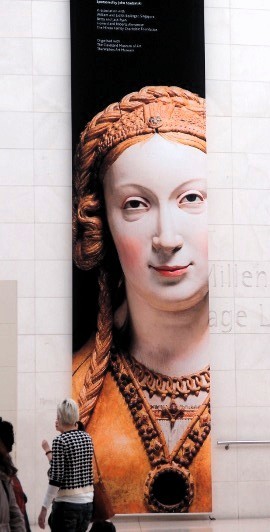 It's a cathedral like space inside the old library reading room, and very fitting for a show like this. The image above is from a page on wikipedia and shows the restored Reading Room. Don't expect the space to look like that however, because it's been converted into multiple rooms and has very subdued lighting. You only get a sense of the huge rotunda and walls through gaps in the artificial walls separating the themes of the show.

The exhibition has all sorts of reliquaries on display, going back to the earliest days of christianity. From something like a fragment of the "true cross", or part of Christ's "umbilical cord" to English saints such as Becket or Cuthbert. There is even some King Charles 1 who seemed to translate almost immediately to martyr and saint when beheaded in 1649 (an Anglican Church Saint).

Some of the items are truly beautiful. Not only the gemstone encrusted and artistically worked caskets that contain many of the relics, but the figurative paintings sometimes wrapped around them. The large picture used to advertise the show (above and right) is also surprising. Fresh and natural and from the early sixteenth century.

Things really were very different in the past and religion really was a matter of life and death to people. Where what happened after death would impact you for all eternity, or at least until the Last Judgement. Peter Ackroyd is perhaps the premier cultural writer/historian of London and his Life of Thomas More well describes the deep religiosity that suffused the medieval world.

Ackroyd's book on More shows the man warts and all, quite different to the film Man for all Seasons (one of my favourite films). The real More could be very coarse, brutal and cruel as he hunted down heretics like William Tyndale. Hilary Mantell's book Wolf Hall also captures this less saintly More and humanises Cromwell. Wolf Hall is one of the best books I have ever read.