Archives
Recent Posts
Out of the Original Sacred Tongues 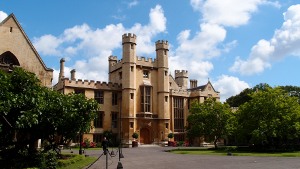 I went to Lambeth Palace Library with a ticket for the new exhibition celebrating the 400th anniversary of the King James Bible.

The exhibition costs £6 and you need to book online (or call) for a particular time. When I saw the exhibition is open on Saturdays during July, I booked an 11 am slot.

Unfortunately, no photographs inside the Great Hall itself, but I took some of the grounds (the photo of the Great Hall below is taken from the Archbishop's web site). 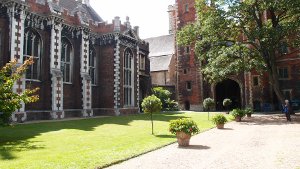 On entry to the grounds and garden, we are greeted by a couple of ladies who act as our guides, and introduce us to the buildings, some history and the exhibition itself. In a way, it almost feels like you are being privileged to a private tour, although there must have been about twenty people in total.

The Palace and Library itself have quite an interesting history, from the times of the "heretic" bible translator John Wycliffe, through Henry VIII and the Reformation. Then through the Commonwealth and Restoration, and all the way up to the Second World War bomb damage. The Hall is a large room and every wall is covered with books, many of which seem to be very old, and almost all leatherbound. 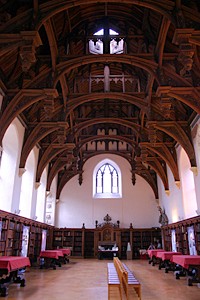 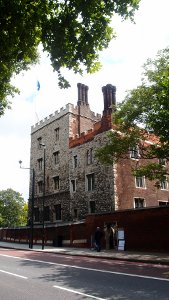 Lollard's Tower contains the remains of a prison from the 17th Century,and is named after the followers of Wycliffe.

An empty space on its outside once contained a statue of Thomas à Becket, removed by Henry VIII who disliked any veneration it was shown by passing boatmen (the Thames used to run directly past the building, by its walls).

Lollard's Tower is mentioned at the start of this excellent In Our Time episode on Wycliffe and the Lollards. You can download the MP3 from the BBC In Our Time web site. The episode is from 16 June 2011.

The exhibition is partitioned into various display "cases" which follow the history of common tongue biblical translation from the earliest days (e.g. Wycliffe in the 14th C), Erasmus through Tyndale, Luther and Calvin and even into the 19th Century with translation to languages like Cree and Malay.

Definitely worth a visit and it would be good to have a better look around the rest of the place sometime as well. Walking distance from Vauxhall by the river.