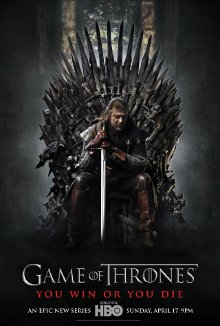 A couple of months ago, I bought George R R Martin's book Game of Thrones. I can't recall why because I don't often read this type of "fantasy" novel.

However, I think that one of the reasons was the critical acclaim it has, with a great many people (see Amazon's reviews) praising Martin's writing. Having finished it a few weeks ago, I agree. It is a well written and well paced book, with characters you can believe in.

I had no idea it was being made into an HBO series. I've seen the first episode now and it is a very well done adaption, well acted and beautiful to look at.

Now, there are five more books in the series, and each is substantial. I do want to read them but will have to decide how to parcel this time out. There just don't seem to be enough hours in the day anymore!