The main component of the new Gnome 3 desktop is the Gnome Shell, and it's been this that has drawn most attention. The shell defines most of the way the user interacts with the desktop environment, so concentrating on this part is natural. The shell is the biggest change from the user's perpective (hence the wailing from some quarters). 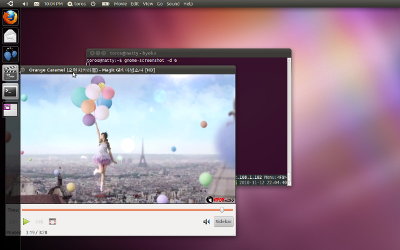 An alternative shell for Gnome 3 is Unity, a component primarily developed by Canonical and Ubuntu.

Unity is also a major change from the current Gnome 2 desktop and has drawn a similar level of criticism and praise.

I have not tried Unity yet and, as with Gnome 3, am cautious. However, the idea of an alternative shell is attractive because it brings me greater choice. In fact, the concept of choice is critical to a healthy ecosystem and at the heart of the free software movement. Having said that, it also has costs, like fragmentation and a loss of focus. It can also lead to some strife and bitterness.

Right now, having two competing visions of the next generation Gnome Desktop is a good thing in my opinion. Both are new and need to gain mindshare and traction, so there's all to play for. This is also not a zero sum game.

The next year or two will be interesting. Good luck to both.