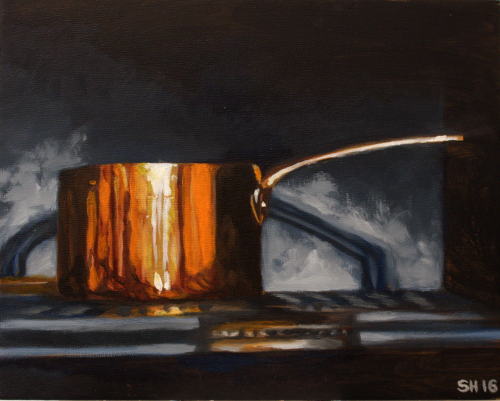 This is a painting done via a Will Kemp tutorial How to Paint a Copper Pot in Acrylics. I painted it in oils instead of acrylics. Kemp's done a very nice reference photograph that's lovely to paint because it's got such beautiful and strong contrasts, both colour and light.

I got some of the pot wrong for some reason (e.g. handle shape) but that's not a problem. I made the background too blue originally as well, and thought I over-worked it to fix, but that's not a problem either and I think it looks OK. The "pot" itself is the star here and it's turned out quite well. I hesitate to add extra highlights to the surrounding metal/cooker in case it detracts, and it is all too easy to mess things up. When is a painting finished?

The painting is on a wooden panel (Ampersand artists panel) using Winsor&Newton Griffin alkyd oils (faster drying oil paints). I used white spirit as a dilutant but also some liquin later. I don't like complexity in the process, especially worrying about medium concentrations (fat,thin etc.). I think some parts of the painting have too little oil and show as matte areas: probably too much solvent (white spirit). I may investigate fixing this, or perhaps varnish will in a few months.

The photograph of the work above was taken in my kitchen under a light bulb, then white-balanced slightly, so the quality is not the highest. By eye on my monitor it seems to be fairly true however.